The comfort of cyclists: Utrecht and Walthamstow 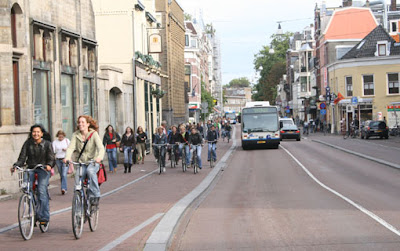 (above) a cycle lane in Utrecht

(below) the cycle lane on Forest Road, Walthamstow, near the junction with Ruby Road E17. No groups of happy smiling cyclists were available for this photograph. 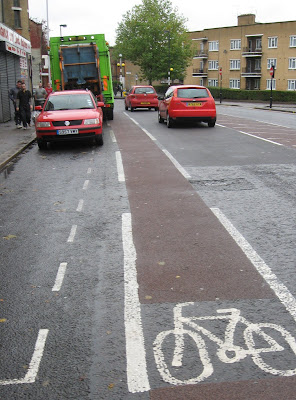 Another symptom of the institutionalised disregard for cycling in Britain is that no one has ever bothered to research cyclists' perceptions of what constitutes comfort or discomfort in relation to traffic:

The literature suggests no common definition of the disutility associated with cycling: sometimes it is considered on a measure purporting to be a ‘level of service’, sometimes a ‘compatibility’ or ‘cyclability’ index, the components of which include issues connected with safety, effort and pleasure, or it has been considered as a risk rating.

Even though most people give road danger as the primary reason why they won’t cycle, it’s very revealing that no research has ever been done into how wide a cycle lane has to be or where it should be sited, in order to be perceived by users as cycling-friendly. As far as the Department for Transport and the Department for the Environment are concerned, a one to one point five metres wide cycle lane on an ‘A’ road in London is just fine and dandy, and Councils can put them where they like, irrespective of road layout or the density of traffic flow, or vehicle proximity and speed.

At the beginning of 2007 this cycle lane was next to the kerb; it has since been moved out in order to create parking bays. There are no restrictions on the width of a vehicle which may be parked here. 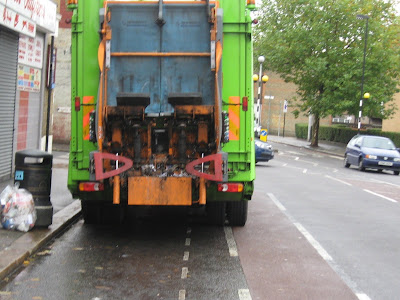 Posted by freewheeler at 11:38