COCKERMOUTH'S Christmas lights switch-on is due to take place on the town’s Main Street on Sunday.

Then it started raining…

Red Cross worker Ian Rideout said large numbers of people were suffering from shock, and that the centre of Cockermouth “looks like it has been completely destroyed”.

“I’ve never seen anything like it,” he said. “The water has caused so much damage that many of the homes here are completely ruined.

Though the latest weather conditions, described as “a historical event” by MeteoGroup forecaster Julian Mayes, could not be blamed entirely on climate change, experts have warned that such freak occurrences are likely to become normal in the years to come.

Research at Newcastle University has established that rainstorms have got twice as intense over the last 40 years, while the Environment Agency predicts that days of heavy rainfall will become three to four times more common over the next decades, increasing flooding tenfold.

The Newcastle team said that predictions of the effects of climate change had suggested it would not reach this stage until the end of the century – one more piece of evidence that global warming is occurring faster than anyone expected. 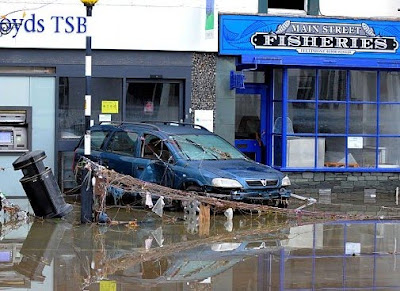 Posted by freewheeler at 11:19