Jumping red lights and riding on pedestrian-only pavements is illegal and can also be dangerous or frightening for others. Don’t do it!

Advice which tens of thousands of London cyclists ignore every day. And note that slippery expression ‘pedestrian-only pavements’ – local authorities are as keen to put cyclists on the pavement through ‘shared use’ as they are to accommodate and promote car ownership by creating parking bays on the pavement.

No one has rendered the old saying pavements are for pedestrians more empty than local authorities, not least a council like Waltham Forest, which regards pavements as good places to put cars, cyclists and revenue-generating advertising panels. And when councils put cyclists on pavements they do so to benefit motorists, not cyclists.

Much illegal cycling is the result of ignorance and fear of cycling on hostile roads, rather than malice. I'd like to see all cyclists offered cycle training and cyclists who break the law required to undergo it.

In other words, Britain's two main cycling organisations collude with the car supremacist transport status quo by demanding that cyclists conform to it. They not only do not represent that large number of cyclists who routinely ignore their pious advice, but they position themselves firmly on the side of a transport culture designed to manage drivers, not cyclists or pedestrians.

The conformist arguments of the LCC and the CTC cut little ice with a cycling radical like Josh Hart:

I run red lights all the time, routinely, and I’m not ashamed of it and I won’t apologize for it.

The bottom line is that red lights and other rigid, auto based traffic rules are only necessary to keep the awkward and clumsy movements of cars packed into an urban area from killing and maiming more than they already do. Why should cyclists, who aren’t the cause of this madness, be caught up in the same wide net as cars? The solution is not to campaign for cyclists’ obedience to traffic lights, but to change the law to better reflect the reality of our transport systems.

I find Josh Hart's cycling advocacy more impressive than Debra Rolfe's. For her to demand that people like Josh (or all those other bloggers who make it plain that they cycle through red lights, including Chris Hutt) undergo “cycle training” is crackers.

Josh Hart’s post provoked a lot of comments. Here are the ones which make most sense to me:

I don’t see the point of waiting at a red light when there are no conflicting pedestrian or vehicle movements.

The traffic control system on UK roads has evolved over the last 50 years or more with little if any regard for the particular needs of cyclists. It is therefore entirely logical and fitting that cyclists should treat this system with the same contempt as the designers of the system showed towards cyclists. Besides which the proliferation of traffic lights in more recent decades has occurred principally to accommodate an unsustainable and obscene increase in motor traffic in our cities. In many cases Zebra crossings that gave by default priority to pedestrians have been converted to Pelican crossings that give by default priority to road traffic, so making walking even less attractive and encouraging car use.

I would go so far as to say that it is the duty of every genuine environmentalist to do everything they can to undermine this iniquitous system, including of course jumping (as we say in the UK) red lights whenever it is safe and convenient to do so.

‘Stop at Red’ completely misunderstands the problem – rather than campaigning for road laws which accommodate cyclists, they are campaigning to force cyclists to conform to the current laws – which are designed for cars.

Many (although not all) riders who jump lights have simply seen the truth of this, and choose to take responsibility for progressing when it is safe, just as pedestrians do. The elephant in the room is that bikes are *not* cars.

The fact that the law largely requires cyclists to obey “car laws” is a problem which should be addressed by new laws. Pedestrians already treat the ‘red man’ as a ‘give way’ sign, and there is no reason why cyclists should be persecuted for the equivalent. If cyclists are cutting up pedestrians on crossings they should be hit with fixed penalties – but not for jumping lights when there are no pedestrians.

The majority of cyclists are not members of a cycling organisation, don’t read blogs, and don’t bother with the kind of feverish arguments which this topic engenders among cycling activists and bloggers. They simply adapt their behaviour to the existing road network, in a classically Darwinian manner. This is partly about survival and partly about convenience. As long as Britain lacks a safe and convenient cycling infrastructure, cyclists are going to ride on pavements, go through red lights and go down one-way streets the ‘wrong’ way. If you punish cyclists who do this when there are no victims (i.e. when there is no conflict with other road users, especially pedestrians), all you’ll do is stop people cycling.

One major attraction of cycling in London is that it offers a quick, convenient way of getting around a dense, often non-linear urban road network. But both cyclists and pedestrians are expected to wait at red lights for long periods of time, simply to accommodate the smooth passage of motor traffic, which remains the number one priority of transport planning in Britain, both at a national and local level. No cyclist or pedestrian wants to wait 2-3 minutes, simply to cross a road, and that is why when the opportunity arises to do so, cyclists and pedestrians both cross at red.

Similarly if you convert roads to one-way in order to smooth the passage of drivers on streets choked with parked cars, then cyclists are either going to cycle down the road the ‘wrong’ way, or cycle on the pavement. Every year in the London Borough of Waltham Forest another half-dozen streets are converted to one way, without any consideration of cycling flow or convenience. With brazen impudence the Council has even done this on recommended cycle routes. I can’t say I’m aware of even a squeak of protest from the London Cycling Campaign, at either a central or local level.

Instead of seeking to punish or re-educate cyclists, supply them with a safe, convenient infrastructure on the Copenhagen/Dutch model and watch the bad behaviour vanish. If you are not prepared to do that – and it seems plain that British transport planning remains doggedly in love with motor vehicle supremacy and fundamentally hostile to cycling and walking – then the ‘bad behaviour’ will continue as cyclists adapt their cycling to dangerous, inconvenient roads which pamper bad, lazy, lawless, reckless drivers. Whether or not you agree with my arguments, this I believe is the future. In the absence of an infrastructure, cyclists will continue to engage in perceived 'bad behaviour'. However, I think there is a big difference between inconsiderate cycling and safe, considerate but unlawful cycling.

Let me add something about this sequence of events. When I had got past the van illegally blocking the cycle lane, and the Council van illegally in the Advanced Stop Line, I moved forward to find a twenty-something female cyclist waiting beyond the ASL. When the lights went to red for the traffic on Forest Road, an all-green phase kicked in for pedestrians at the junction. There were no pedestrians crossing at any of the four crossings. The woman cyclist sailed across at red and went off down Fulbourne Road. A thirty-something male cyclist who’d been waiting ahead of the vehicle-occupied ASL on Forest Road went through the lights at red and turned right into Wood Street. And I cycled across at red and turned right on to Forest Road.

The three of us were not inconveniencing pedestrians because there weren’t any, nor were we putting ourselves in danger, because the motor vehicles were all held at red and there were no emergency vehicles howling towards us. Our behaviour was motivated by the knowledge that it was safe, convenient cycling and considerably safer than waiting for the lights to turn green, when the possibility of conflict and danger arose from those vehicles lurching forwards out of the ASL. Proof, if you like, that cyclists who break the law by jumping red lights may be safer, especially when you consider that

Most cycling casualties are at junctions… These collisions are more likely to involve serious injury or death to the cyclist. This is certainly not to say that "jumping lights=safer" but that at some particular junctions it can be safer to proceed ahead carefully when the junction is empty

That’s a very different situation to this. Drivers jumping the red light at one of the busiest pedestrian crossing points in the borough (Willow Walk E17 at the junction with High Street). 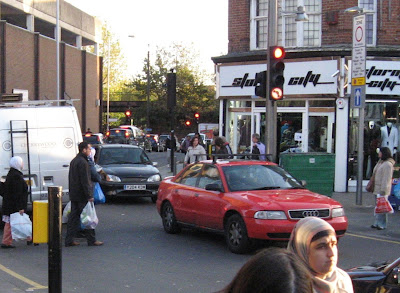 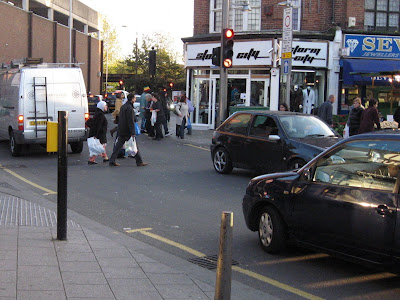 Posted by freewheeler at 11:01