A dirty and neglected cycling facility 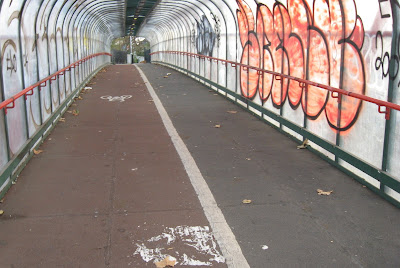 Here’s the difference between spin and reality:

The Council also recognises the difficulty cyclists encounter at roundabouts and signalised junctions on main roads with three major underpasses for cyclists at the Billet, Waterworks and Green Man roundabouts, and two cycle/footbridges crossing the M11 link road and railway line in Leytonstone.

In reality all five facilities mentioned were not designed to benefit cyclists but to benefit motorists, by sending cyclists either under or over roads, on diversionary routes which are inconvenient and threatening. It’s one of the reasons I used to be bitterly opposed to segregated routes: UK cycling segregation is almost always installed to prioritise motor traffic flow. But there’s another problem with these fa(r)cilities: their gross neglect and lack of maintenance.

When I cycled over the cycle/footbridge near Leyton station (the Langthorne Road E10 route) on November 3rd, I spotted two plastic objects which looked like they might have come from a domestic electrical appliance, perhaps a washing-machine or a tumble drier. When I cycled over this bridge yesterday they were still there. In other words, over a period of 23 days no one had been near this facility to clean or maintain it. That doesn’t surprise me a bit. The cycling infrastructure generally in the London Borough of Waltham Forest, such as it is, is shockingly neglected.

These two cycle/footbridges (which the clowns at Sustrans have in the past described as ‘exemplar facilities’) are also disfigured by graffiti, as is the underpass at the Waterworks roundabout. It’s another reason why cycling in London is being suppressed and is most unlikely to grow significantly:

“Graffiti is a significant problem in London. In a survey we carried out recently over half of those questioned (61%) said they would consider taking a cab rather than walking or cycling through neglected graffiti-ridden areas. Most of our respondents (83%) would avoid streets that they consider to be neglected."


The crap that was there on November 3rd... 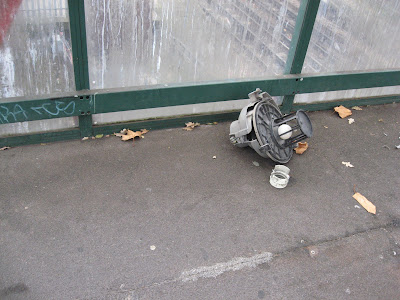 was still there yesterday, over three weeks later: 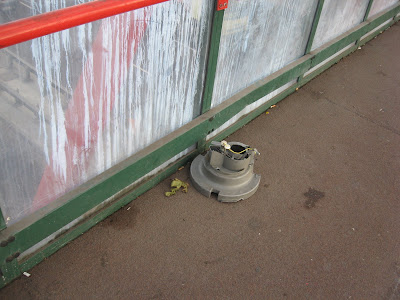 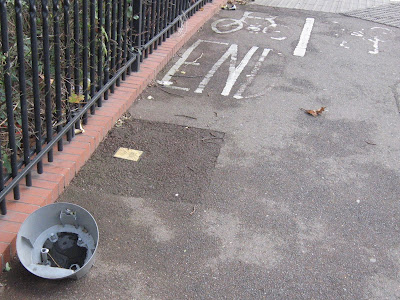