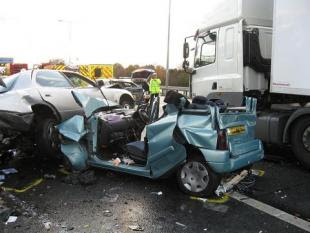 SIX cars and a lorry were involved in multiple accidents on the M11 today (November 22), which left two people in hospital.

A one mile stretch of the motorway, near to the M25 interchange at junction six, saw three separate accidents.

"But in less than a mile of motorway there were three accidents believed to have been caused by a combination of heavy water spray and bright sunlight reflecting off the road.

Oh really, Terry? Accidents, were they? Not caused by the drivers, then? No criminal negligence involved? Nothing to do with the fact that most drivers on the M11 are belting along like lunatics at speeds well in excess of 70 mph, recklessly close to the vehicle in front, indifferent to road conditions, then? A situation which bothers no one in the emergency services at all – not Essex police, who collude in massive law breaking and who designate all fatalities as “accidents” (on their signs asking for witnesses), and a situation which doesn’t appear to bother the Fire Service either.

And these crash sites, incidentally, are nowhere near this much-demonised speed camera.
Posted by freewheeler at 08:20