8,100 cycle trips a day in an Outer London 'Biking Borough' 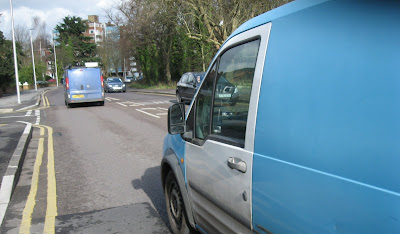 Is your life lacking in excitement? Looking for new thrills? This live action shot from a ‘Biking Borough’ shows what you’ve been missing. Take up cycling and experience blue van man screaming past very close, going much faster than the speed limit.

an extra million cycling trips by 2026

For the cycling revolution to really happen it must recruit, according to TfL’s own analysis, two-thirds of its new pedalling enthusiasts from outer London.

One of these Outer London boroughs is Brent. As part of its status as a ‘Biking Borough’ the London Borough of Brent commissioned the MVA Consultancy to analyse the condition and prospects for cycling in the borough.

It’s a very interesting report. Cycling levels in Brent are very low. The 2001 census registered a commuter cycling rate of 1.6%.

Data from a 2009 Residents Survey shows a higher mode share for cycling, of 5%. Although the sample size is small, this supports the trend of an ongoing increase in cycling across London.

But that Survey probably exaggerated the rate of cycling. Apart from the question of how representative the sample was, its fieldwork was based on the period 28 May to 26 August, i.e. months when more people are likely to be cycling and to perceive themselves as cyclists.

TfL (which uses a more sophisticated methodology) currently records a modal share for Brent of 1.2%.

52% of Brent residents identify themselves as ‘regular’ cyclists but that self-assessment is glaringly at odds with all the hard data in the report.

Another way of looking at the rate of cycling is by the number of trips. Brent currently has a population of around 270,600.

The LATS (2001) analysis estimates that there are around 7,300 cycle trips made in LB Brent by Brent residents per day.

Bear in mind that if every one of those trips involved commuter cycling, with people following the same route to and from their homes over a 12-hour period, then the screenline would be measuring just 3,650 cyclists.

Our baseline analysis section of this report uses the LTDS data to report current cycling trends from 2005-8. This shows that trips per day are around 8,100, which represents an increase from the 2001 baseline reported in the LATS analysis.

At best that’s an increase of 800 daily cycling trips after 7-8 years, or around 100 extra trips each year. Which might mean around 50 new cyclists at best, every year for the period 2001-2008. Recruiting 50 new cyclists each year out of a population of 270,600 people is not exactly a ‘cycling revolution’.

In terms of LB Brent resident trips this would mean an increase of approximately 29,200 trips per day over this time period.

That’s roughly an extra 1,800 cycle trips each day for EACH of the next 16 years. That could be interpreted to mean recruiting an extra 900 cyclists annually, all the way up to 2026.

Obviously it won’t work out with quite that simple symmetry and logic, but nevertheless Brent faces an enormous challenge in meeting even the Mayor’s very low target for increased London modal share.

There are other indications in the report of the very low rates of cycling in Brent. If I have understood the statistical analysis correctly, the highest rate of cycling in the borough recorded anywhere at any time is 38 cyclists in an hour.

TfL research showed that cycling is seen as a ‘sporty’ activity.

women and ethnic minorities are currently underrepresented in cycling in Brent.

The most regular cyclists (3+ days per week) are aged 30-39. Ethnic groups are much less likely to cycle than White residents, particularly Asian people.

One of the most remarkable statistical revelations in this report is that 82% of Brent residents aged 20-29 don’t cycle.

To me, that indicates the generations which have grown up in households where no one cycles and where travel by car is regarded as the natural way of getting around.

Having identified the parlous state of cycling in the London Borough of Brent, the report goes on to describe how Brent council intends to address it.

A stakeholder event was held in March 2010 with around 25 representatives from LB Brent,Transport for London, local businesses, cycling organisations and groups and the Police.

There was much discussion and out of it emerged a strategy for increasing cycling in Brent. In association with Borough officers this was refined to a ‘Top 10’

This strikes me as the kind of approach you’ll find associated with ‘encouraging more cycling’ almost anywhere in the UK. It boils down to a range of small scale initiatives and minor improvements to the vehicular cycling environment. ‘Cycle friendly neighbourhoods’ are not defined with any precision but it is reasonable to assume this means some limited new vehicular cycling infrastructure rather than any radical re-allocation of street space away from the dominance of motor vehicles.

I think Brent will fail as a ‘Biking Borough’ and will never meet the Mayor’s target because it nowhere addresses the hegemony of the car, or why for most people car travel is so much more attractive than cycling.

The report considers the possibility of getting drivers to switch to cycling. For example:

Dissatisfied Drivers "I drive because it’s convenient and not because I enjoy it."

But virtually no one is motivated to cycle in order to benefit the environment. People primarily ride bikes because it’s a quick way of making short journeys in an urban environment, or because it is more attractive than using public transport (buses, tubes and trains may be unreliable, expensive or overcrowded, whereas cycling is a reliable way of getting to work and a very, very low-cost form of travel).

This report turns reality on its head. The scope for getting ‘Dissatisfied Drivers’ to cycle is actually vastly greater than getting ‘Environmentally Aware’ drivers out of their cars. A so-called ‘Environmentally Aware’ driver is just as likely to switch to an electric car as to a bicycle. But a ‘Dissatisfied Driver’ could be persuaded to cycle but only if cycling has the edge on car use – i.e. it has to be convenient, direct and enjoyable.

But of course although cycling may sometimes be convenient for some journeys in Outer London nobody could really call it enjoyable or relaxing, and the convenience of cyclists is systematically subordinated to that of car drivers, which is why so few people are prepared to cycle. For cycling to be both convenient and enjoyable in such a way that large numbers of new cycling trips are made, you need to re-engineer the streets and unequivocally put cyclists before those whose chosen mode of mobility is the private car. This is something which TfL’s traffic modelling – ‘Network Assurance’ -is fiercely opposed to. So is the entire traffic planning culture in Greater London, all the way from local authority level to the Mayor's office. Instead of serious cycling infrastructure all that is on offer is 'encouragement'.

Brent seems to me unlikely to meet its hugely ambitious targets for cycling by proposing such strategies as this:

I am not aware of any evidence that ‘seeing someone you trust’ cycling leads to friends or family members also deciding to cycle.

This MVA Consultancy report does a professional job of identifying the poor condition of cycling in Brent. However, it doesn’t diagnose it because it is incapable of understanding the reasons for it, and therefore its cures for the condition are rather like medical cures of the pre-modern era – a mixture of quackery and superstition. All the traditional cycling folk remedies are here – cycle training, signposting, promotional activities, recycling old bikes – and none of them will save the patient.

At the same time that it ‘understands’ cycling and sets out ways of increasing it, the report acknowledges an area of mystery:

The focus of this strategy is around existing cyclists and ‘near’ cyclists, such as those that have cycled but not recently. Understanding the reasons for this lapsed cycling could lead to increase cycling levels in and around the cycle hub(s).

The report did not investigate the reasons for lapsed cycling.

This is significant because the report evades one absolutely central aspect involving whether or not cycling strategies can work.

It seems to me that at quite a fundamental level, the MVA Consultancy doesn’t understand cycling. The report notes the phenomenally low rates of cycling to school among the London Borough of Brent’s children – 0.3 per cent – and states:

This data would point to significant barriers to cycling across Brent and the information we have available is not sufficient to fully understand these barriers. Discussions with school travel officers indicate that parents have a significant influence on school travel patterns and there are opportunities to develop relationships with parents groups to encourage cycling. Further work is necessary to understand the root causes of these low cycling levels.

And there we have it. This report shows no understanding of the central importance of addressing subjective safety. Instead of safe and convenient cycling infrastructure what is really on the cards is developing relationships with parents to ‘encourage’ them to send their children to school on bicycles.

It won’t work. Cycling will at present only increase to the extent that people can be persuaded to cycle in Outer London traffic. There are few signs that persuasion and minimalist new cycling infrastructure will ever be enough to encourage the surge in cycling which even the Mayor’s deeply unambitious target requires. Cycling in Brent appears every bit as doomed to stagnate as it does in the London Borough of Waltham Forest or in any other Outer London borough.

You can access the complete Brent report here.
Posted by freewheeler at 07:38