Cycling and the bogus ‘neutrality’ of TfL traffic planning 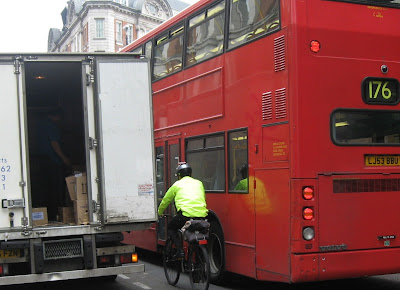 Conditions for cycling in central London


The intellectual incoherence of Transport for London’s traffic modelling is exposed all too clearly in the response which it has been forced to make to Cyclists in the City’s deconstruction of its Blackfriars Bridge scheme:

Reducing the number of lanes on the bridge would greatly restrict traffic movement and lead to significant queuing, potentially over a wide area. Buses make up a significant proportion of traffic passing through this area: in the busiest hour of AM peak period a total of 64 buses pass north and southbound through the Blackfriars Bridge junction. TfL has a duty to keep traffic moving throughout its network. Overall, the scheme has been designed to have a neutral effect on vehicle flow over the bridge.

Setting aside the particular arguments about local aspects of this scheme (and do read the Comments), the striking feature of TfL’s traffic modelling is its car-centrism. It is determined to accommodate motor vehicle flow above all other considerations, an attitude which is reciprocated at a local level by a determination to accommodate car parking above any consideration of the interests of pedestrians, cyclists and bus users.


(Above) Existing conditions for cyclists at the northern end of Blackfriars Bridge. TfL wants to make it even more hostile for cycling.

TfL’s ‘neutrality’ is just another version of ‘competing demands for road space’.

As one commentator recently observed

In 2009, I attended a seminar at City Hall entitled The Economic Impact Of Traffic Signals. This featured presentations, using sophisticated computer-modelling, of the economic effects of traffic lights in different scenarios. However, not one of the presentations factored in pedestrian movements, the implication being that time is money (in the case of road traffic), but the time of pedestrians is worthless.

It’s the same with cyclists. Cyclists are regarded as making no contribution economically and their time is of no value. Moreover TfL is not prepared to cede an inch of road space to cycling and cycling is always subordinated to the greater priority of motor vehicle flow:

When Ken Livingstone became Mayor of the new Greater London Authority, Transport for London “reconceptualised” cycling and walking and the LCN was ended, to be replaced by the “London Cycle Network Plus” (LCN+) at a somewhat reduced 900 kilometres. Thus was born the first step in ushering a less extensive engineering scheme with a more impressive name.

LCN+ was never finished, with some 600 kilometres completed. Why? One central reason is that if there is to be a special “route for cyclists”, space will have to be allocated to it. Either there happens to be lots of spare road space around, or else it has to come from motorised traffic. Since there has been no large scale removal of motor traffic road space, “cycle routes” dependent on this do not get completed.

London remains an astonishingly backward, car-sick, car-dependent city, which continues to rotate around the ‘needs’ of car drivers.

Instead of hollowing out urban centres from the car, TfL continues to put the car first. Instead of re-designing London’s streets and providing serious cycling infrastructure which would really get people cycling, cycling is left on the margins, with badly designed scraps, always subordinated to the greater presence of motor vehicles.

Instead of high quality cycling infrastructure all we get is rubbish 'advisory' cycle lanes, almost always less than the absolute desirable minimum of 2 metres in width, and promotional campaigns seeking to ‘encourage’ people to take up cycling in the very kind of environment which survey after survey shows is a major deterrent to cycling, i.e. among motor traffic.

total usage equates to only around 0.07% of the total journeys in the city. On average, Londoners are using these bikes not once per day, not once per week or once per month, but about once every 18 months. In fact, as each individual trip is being counted here, you could also say that this is the equivalent of the average Londoner going out and returning home again about once every three years by using these bikes.

And where cycling is truly in the doldrums, in Outer London, all we get from TfL is ‘Biking Boroughs’ – a concept which is due for some deconstruction. Watch this space…
Posted by freewheeler at 13:59