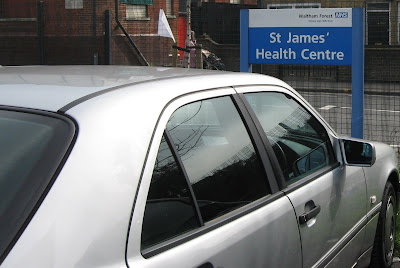 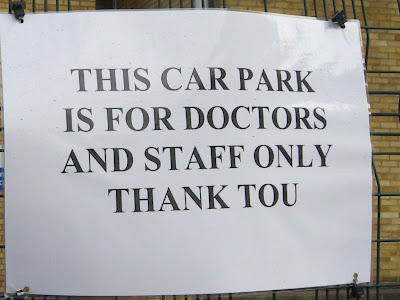 The NHS is a diseased organization with extraordinary levels of car dependency among its management and staff.

Commuting and business journeys by NHS staff account for a staggering 0.12% of all carbon emissions in England. (source: NHS Carbon Reduction Strategy, 2008)

As those NHS staff members who do cycle have observed:

so much NHS ‘support’ for cycling is mere lip service. There is no overall promotion of sustainable transport in the NHS and many Trusts neither know nor care what cyclists need.

The NHS has the hypocrisy to run a website extolling the virtues of cycling. When you click on the Cycling Safety Tips link you get crap like this:

On busy or narrow roads don’t cycle next to another person.

[Because after all, you might hold a driver up and that would be intolerable. This isn't Denmark or the Netherlands you know.]

Be visible
Make sure you’re visible to other road users and pedestrians. Keep away from the kerb, wear bright or fluorescent clothing in daylight or poor light.

[Advice to cyclists to wear bright clothing colludes with reckless driving by blaming the victims of criminally inattentive driving.]

Always wear a helmet as this reduces the risk of head injury if you’re in an accident.

[This is advice which would be better applied to the occupants of motor vehicles, who statistically are more at risk. So why this silence on the part of the NHS?]

Legal issues
It's against the law for cyclists to:
Cycle the wrong way up a one-way street, unless there's a sign showing that cyclists can do so.

[One-way streets are designed exclusively to promote the smooth flow of motor vehicles and extensively discriminate against cyclists.]

The NHS colludes with motor danger and the car-centric status quo and demands that cyclists adjust their behaviour to it, not that the source of the danger be removed. Ironically the safety tips website is illustrated with a photo of three cyclists alongside lethal railings. Why isn't the NHS demanding that the street environment be designed to benefit the benign road user groups?

Which brings me to the shabby, depressing and profoundly car-sick St James’ Health Centre in Walthamstow. Just wandering around this building made my spirits sink.

Literacy is not the strong point of these highly paid professionals:

We are a eight doctor practice 3 males and 5 females. We also have a Nurse Practitioner, 2 Practice Nurses and a Health Care Assistant.

The practice is car-sick to its core. It is situated by a train station and a bus station but contains no advice on how to get to it other than by car. It contains no cycle stands at all.

The practice has 23 members of staff

I counted 32 cars in the car park on a weekday last week but perhaps the extra ones were visiting health professionals. How many of these vehicles had been driven distances of less than 5 miles? Probably most of them. How many had been driven less than 2 miles? Quite possibly more than half of them. And why not? Unlimited free car parking is a great incentive to car dependency.

As a diseased institution St James’ Health Centre naturalises car-sickness and infects others:

We are proud to be recognised both as a Teaching Practice for Undergraduate Students from the Royal London and Barts & Royal Free/University College London Medical Schools and as a Post Graduate Training Practice for GP Registrars. 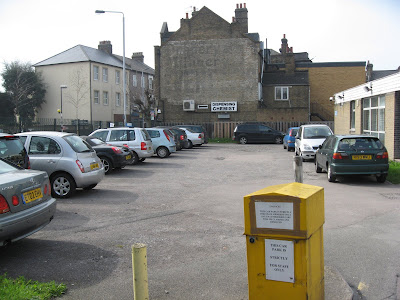 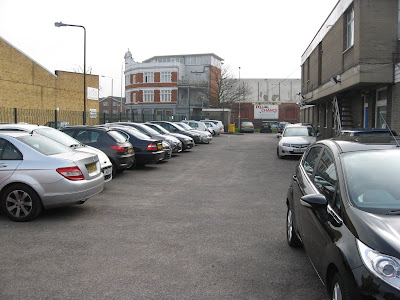 (Below) Visitors arriving with prams or buggies are advised to lock them to a railing outside the entrance. Advice which is unlikely to be followed, since no one I know who pushes a pram or buggy ever carries a padlock and chain around with them. There’s plenty of space by the entrance to the health centre for bike stands, if anyone working here had ever heard of those quaint devices. Naturally the pram parking area has no protection from the rain. 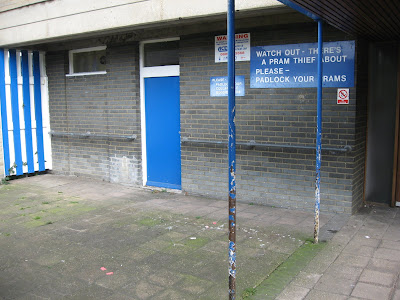 (Below) Judging by the architecture, this health centre opened in the 1960s. And in all that time no one has done anything about this kerb by the entrance, which presents a major obstacle to anyone in, or pushing, a wheelchair. The management of this practice really is stupefyingly mediocre and the doctors who work here should be ashamed of themselves for their lack of insight into the needs of those with a mobility difficulty, apart from their indifference to anyone who chooses to arrive here by bicycle. 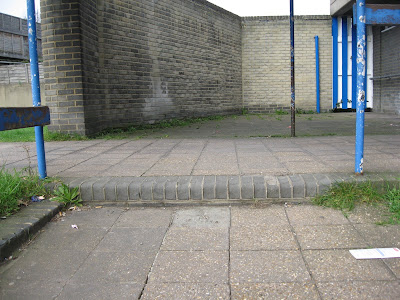 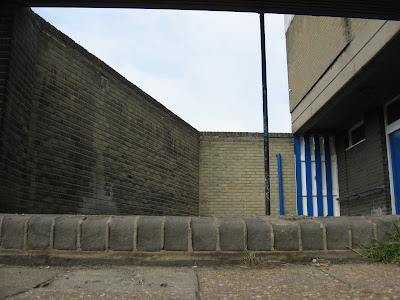 Posted by freewheeler at 15:18