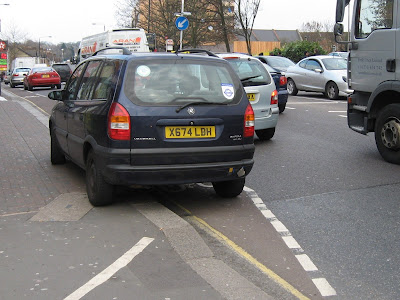 Where the off-road cycle path turns into an on-road cycle lane on the eastbound A503 (Forest Road E17, at the junction with Spruce Hills Road). Tuesday, 3.30 pm. There was no one inside this taxi. The driver had almost certainly gone into the adjacent convenience store, which acts as a magnet for people parking here throughout the day.

The Public Carriage Office (PCO) is responsible for administering the licensing of taxis and private hire services in London and acts on behalf of TfL, the Licensing Authority.

And it doesn’t give a toss about licensed drivers who behave like this. Nuffink to do with the PCO. Outside its remit. And Transport for London is content to maintain this state of affairs.

These reckless anti-social yobs enjoy powerful institutional protection from the Mayor of London, Transport for London and The Public Carriage Office, none of which are the remotest bit interested in curbing the excesses of these drivers.

And more good news for anyone thinking of becoming a minicab driver.

Having a driving or criminal conviction will not necessarily prevent you from becoming licensed.
Posted by freewheeler at 08:17