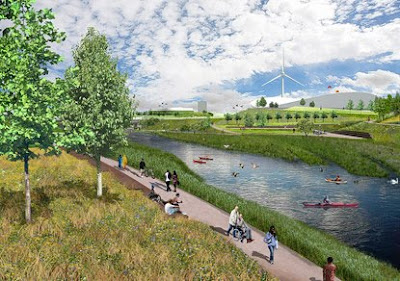 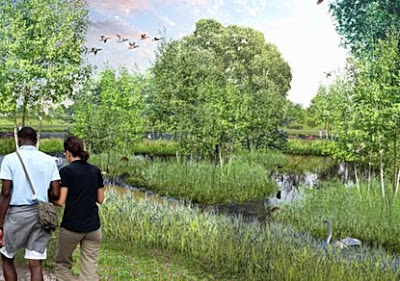 The Olympic site – so very, very Green, with not a motor vehicle in sight. And this (below) is the future North Plaza seven-lane vehicle entry point. 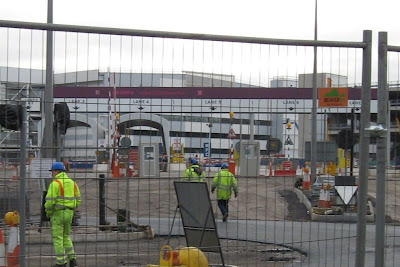 Last weekend I went looking for one of the fabulous Greenways that is going to bring the population of Waltham Forest pouring on bicycles and on foot towards the Olympic Village (such a lovely bucolic name, don’t you think?).

As the Grumpy Cyclist has previously noted, reports of multi-million pound upgrades of the towpath route are somewhat exaggerated.

Recently the towpath on the north side has been resurfaced between the A12 and Lea Bridge Road, although a 2 metre wide pathway shared by two-direction cyclists and pedestrians is scarcely up to Dutch standards, nor can it have cost millions of pounds.

I followed the route of the projected Greenway that runs south of the River Lea on the northern side of Hackney Marsh (i.e. that part of the river which runs to the north of the main branch which is technically named the River Lea Navigation Hackney cut). There were no signs of regeneration apart from some tree planting and a few patches of fresh gravel put in the worst potholes and puddles. This Greenway route comes out on Homerton Road (B112), close to the Eastway (A106) and A12. Here, there are no crossing facilities and Hackney Council have blocked off the footway on the other side. But not to worry. With Jason Bourne as my role model I set off for the Olympic site, and all that was required of me was to cross a grand total of nine lanes of fast moving motor vehicles with no signals provided for cyclists or pedestrians. Having achieved this - not advisable for those with children – I arrived at the fencing and was able to take the above pic.

Adjacent to the numbered seven lane vehicle entry point is this multi-storey car park. Has anybody used the FOI to ask what the total car parking provision is at the sustainable Green Olympic Village? Just a thought. 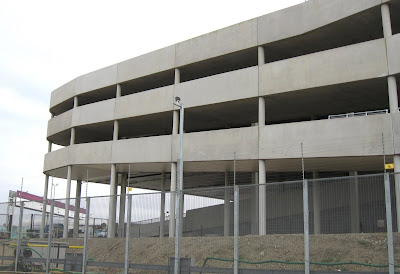 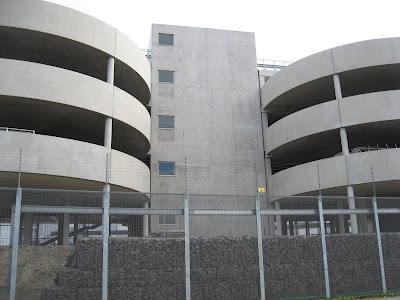 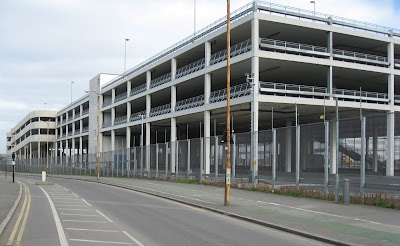 (Above) Parking for hundreds of cars at the sustainable Green Olympic site.

A few days later I was in Stratford when I spotted another multiple-lane vehicle entry to the Olympic village. This is the South Plaza entrance. Funny, really, for what was originally promoted as a largely "car-free" event. 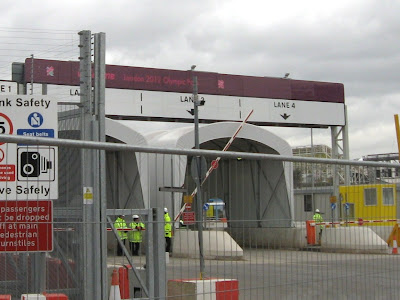 I'd no sooner taken this pic than a security guard sprang out and stood in front of the camera and said I was not allowed to take photographs. I politely pointed out that I was standing in the public highway (namely Pudding Mill Lane E15) and I was perfectly entitled to take photographs. He continued to be obstructive, stood in front of the camera and just kept repeating 'No photographs allowed'. Then I spotted he was an employee of G4S, the notorious out-of-control company whose drivers regularly break the law by driving on the footway and obstructively parking there. So I took the guard's photograph. He didn't like that and beat a retreat. Having photographed what I wanted to photograph I then proceeded on my way.

I was once introduced to the chairman of the London Organising Committee for the Olympic Games and he seemed delightful and charming. If I ever meet him again I’m afraid I shall have to have words. 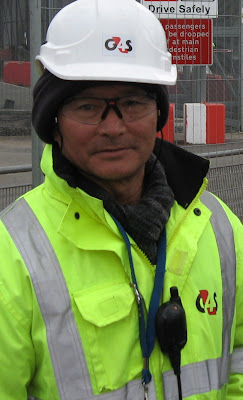 The Olympic Park Legacy Company (OPLC) has submitted a planning application to the Olympic Delivery Authority – Planning Decisions Team. The Alternative VeloPark proposal [alternative to what?] seeks planning permission for…

Because obviously when you’re going cycling the only way to get to the cycle track is by car.

There are only plans for 222 cycle parking spaces outside the London Olympic velodrome. The Olympic Delivery Authority (ODA) estimates that 7%, or fewer, spectators will arrive at events by bike, despite the provision of several on-road and off-road cycle routes in the Olympic Park.

The plan for 222 places in fact represents just 4% percent of a 6000-person capacity.

There’s a ‘public drop-in session’ about the latest planning proposal, at the View Tube (follow the Greenway out of Hackney and go to the very end) on Sunday 27 March 10 am – 5 pm. Comments may be sent (deadline 7 April) to: planning.enquiries@pdt.oda.gov.uk

Good questions to ask would be:

Why are new lengths of highway and extra car parking being proposed for what was originally promoted as parkland for people to walk and cycle in?

How many individual parking spaces are planned for the site during the Olympic games?

How many additional parking spaces are planned for the site afterwards?

Is the security fencing going to be completely removed from around the Olympic site once the games are over? Or will some sections be retained to keep the oiks of Hackney, Newham and Waltham Forest away from all those new luxury housing developments?