The George Orwell prize for Double-Speak has been won this year by Waltham Forest Council. The judges paid tribute to ‘the Big Screen’ in the Town Square – twelve hours of continuous and compulsory TV babble. They were also impressed by the council’s decision to prevent local residents attending council meetings on the grounds that fire regulations did not allow full use of the public gallery.

However, what clinched their decision was this new hoarding, in which the council wastes yet more money on consultancy, design and agency fees in order to boast that it is spending its money wisely. The judges were unanimous in deciding that sacking lots of low paid workers was a small price to pay for advertising of this calibre. (See it at the legendary 'Arcade site' in central Walthamstow and other select locations.) 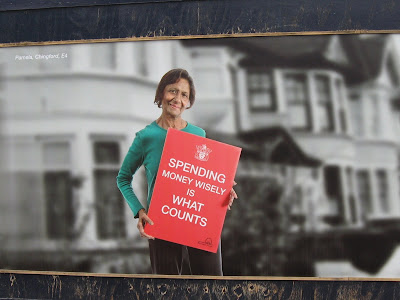 Posted by freewheeler at 12:06