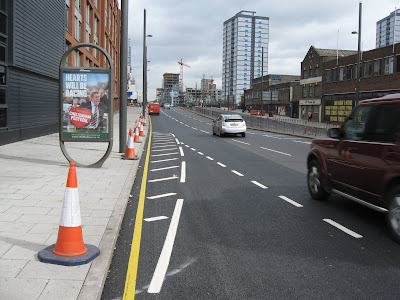 Richard Lewis is a principal town and transport planner at the London Borough of Newham.

My suggestion, which I would like you to consider, is that good infrastructure for cycling in the UK is a mix of all things: where cyclists ride the streets and roads with motors, then motor traffic speeds should be reduced, enabling fearless sharing; where direct arterial road routes provide the shortest link to key destinations (and the alternative routes are indirect, perceived as unsafe at night, or difficult to follow), then Copenhagen-style infrastructure should be provided where there is sufficient width and measures should be taken to increase the relative convenience of cycling compared with other modes, by introducing networks of ‘modal filters’ (road closures with gaps for cyclists) to maintain direct access for cyclists and reduce route options for drivers.

The key thing in any event, it seems to me, is good design of public spaces.

And now let’s look at the latest development of public space in the London Borough of Newham. Cyclists using the traffic-free Olympic Greenway are currently diverted off it down Pudding Mill Lane (and will continue to be until 2014). You emerge on to the A11 (above), which is little more than an urban motorway. Traffic is screaming towards you downhill from the Bow flyover.

There is no infrastructure for cyclists at all. This is supposed to be a future Cycle Superhighway route but Newham Council is currently blocking implementation of even this type of infrastructure. The footway here is very wide, pedestrian flow is very low, and the scope for a segregated Dutch cycle path is blatantly obvious. But in this refurbished street scene cyclists get nothing. And the notion that cycling is going to grow exponentially in these kinds of conditions is very optimistic. 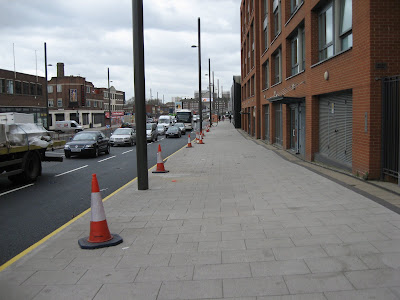 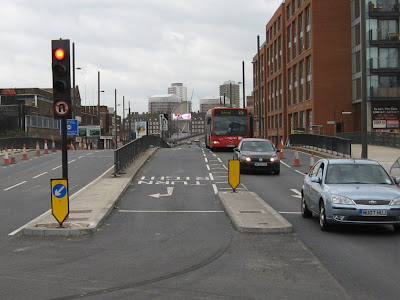 (Below) Obviously a cycle path wouldn’t be possible here because it might interfere with the crowds of bankers standing here deciding which new Porsche to buy from the showroom. And where better to locate a Porsche dealership than in one of the poorest boroughs in London, with very low levels of car ownership? Easy access from the A11. 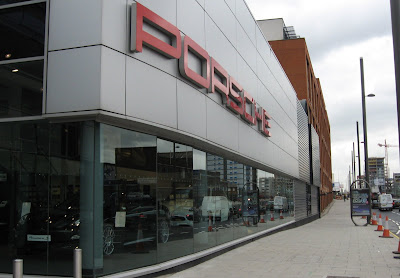 What struck me was the high levels of cyclists using the footway here (below) rather than mix it with lorry drivers and speeding 4X4 drivers on the urban motorway. So there you are, you see, it's all the fault of cyclists like these, acting in ways which stops cyclists winning respect. 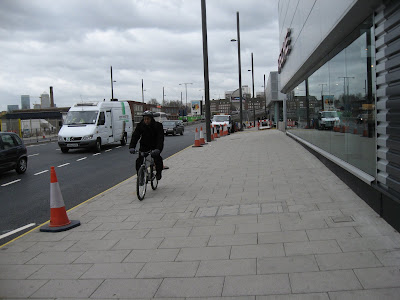 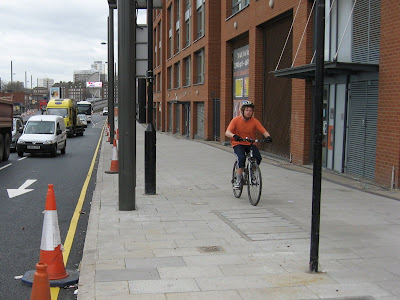 And for a final historic irony, this footway-cluttering advertising panel (below) designed to distract drivers, extols Newham Council’s commitment to recycling and a Greener, cleaner Newham. Just don’t walk, cycle or breathe the air… 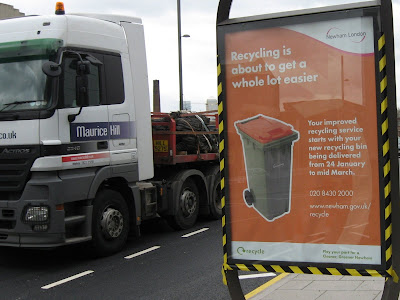 Posted by freewheeler at 13:15