The London Assembly transport committee, cycling, and the metaphysics of congestion 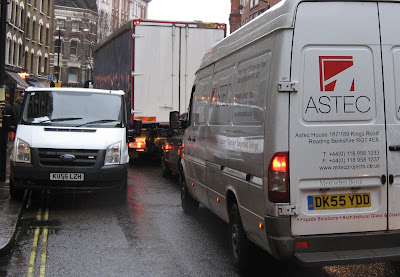 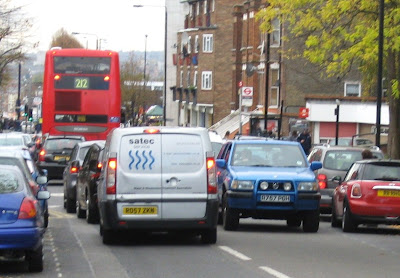 The highlight of next week's business at City Hall will be Wednesday's meeting of the London Assembly transport committee. Guests including Boris's transport adviser Kulveer Ranger and the RAC Foundation's Stephen Glaister will take part in a discussion about worsening road congestion in the capital, which is the subject of a just-launched investigation by the committee.

What is congestion? For transport professionals congestion is defined and measured as vehicle delay implicitly involving many vehicles. This is regarded as inherently a bad thing. But there are at least three reasons why motor vehicle congestion isn’t necessarily a bad thing at all.

Congestion could be defined as involuntary traffic calming. Congestion is probably one of the reasons why road casualty figures for killed and seriously injured in towns and cities continue to decline. Vehicles which are stationary or are travelling very slowly are, if their drivers collide with another road user, unlikely to have lethal consequences (although there can be an exception to this – lorries and buses which hit cyclists). For pedestrians, crossing the road when traffic is gridlocked becomes safer and easier (though do watch out for that undertaking cyclist and that overtaking biker).

There is also the question of the constituents of the traffic jam. Conventional traffic planning assumes that congestion is bad irrespective of the types of vehicles which are delayed.

But there are also many single individuals in private cars choosing to drive distances of five miles or less who are delayed by congestion or, similarly, passengers in taxis. Is it a bad thing if they are delayed? I don’t think so. Taxis and private cars cater for individuals choosing to make what are usually short journeys in an urban environment which offers many alternative travel modes. If you choose the least benign and most polluting and anti-social mode, why should you be privileged? It is perfectly possible to ban certain road user types from using particular roads.

Thirdly, congestion might actually deter people from using their cars for short journeys. If it takes you 45 minutes to drive a mile and this experience becomes a regular one, you will soon realise that a car is an impediment to travel, not an asset.

TfL manages 5% of London’s road network – basically the major routes which carry up to 30% of motor vehicles, or as TfL would say, ‘traffic’. Pedestrians are not regarded as traffic, and although cyclists are traffic they are often not identified as such, their trips are often not measured, and they are conventionally regarded as an impediment to motor vehicle flow. Pedestrians and cyclists are regarded as making no economic contribution to society, unlike, say, car drivers.

London’s roads are among the most congested in Europe. This congestion is estimated to cost the region £2 billion in lost economic productivity annually. There are also consequences for personal health, including air pollution.

Levels of traffic congestion are expected to worsen on the next two decades. London is predicted to gain an extra 1.3 million people and up to 750,000 new jobs by 2031.

(A prediction. If 2 per cent of those extra people choose to cycle to and from work in London each day TfL will be able to claim an extra 26,000 cycling trips and although the Mayor’s target of 5% modal share won’t have been reached we will be informed that, excitingly, cycling numbers continue to increase.)

TfL’s analysis shows that areas of greatest congestion on the network will increase by 2017, reaching areas of outer London that are currently classed as moderately congested.

The Greater London Assembly is concerned about this state of affairs and its Transport Committee is investigating.

Sadly the GLA Transport Committee gives no sign of recognising either that congestion might be a good thing, or that London’s future lies in mass cycling, not continuing to pamper motorists. Mass cycling will only be achieved by a radical reallocation of street space, something which no one in authority in London either recognises or believes in. Instead all that’s on offer is the usual tinkering around at the edges.

Although it is not proffering this as a solution, the GLC Transport Committee nevertheless believes in principle that

The simplest solution to cutting congestion is to increase the supply if the network by building more roads.

It’s truly incredible, isn’t it, that a supposedly professional body dealing with transport in our capital city is producing reports that come up with utterly discredited analyses like that. Why is the GLA Transport Committee employing people to write about transport matters who are complete amateurs and who have evidently never heard of induced demand. Even the Department of Transport discovered some 75 years ago that building a new road simply results in increased vehicle flow, although as you might expect from this car-centric organ of the British state it chose to avert its eyes from its own research findings.

London currently has sub-standard cycling infrastructure or no infrastructure at all on roads which are commonly perceived as unattractive, inconvenient and dangerous for using on a bicycle. The conventional quack remedy is to treat this as an individual behavioural problem which can be remedied by promotional activities and cycle training.

Cycling in London will currently only expand to the extent that people can be persuaded to cycle among traffic. All the evidence indicates that Londoners would prefer to use any other means of transport than the bicycle for 98 journeys out of 100. There is no compelling evidence that this is significantly going to change in the future.

The GLA describes a strategy that

intends to manage the current road network more efficiently to ensure maximum capacity (i.e. ‘smoothing the traffic flow’)… and to reduce the need for Londoners to use their cars for certain journeys.

But that is incoherent and contradictory. Few Londoners really need to use their cars for journeys of 5 miles or less but such journeys are encouraged by all London local authorities, which have promoted multiple vehicle ownership by permitting the conversion of footways for car parking, by reducing the costs of CPZ permits, and by massively investing in infrastructure which makes driving attractive, fast and convenient at the expense of benign modes such as walking and cycling. Traffic signals are organised to discriminate against pedestrians and on-road infrastructure for cyclists is either advisory, or where mandatory (ASL cycling reservoirs) not enforced.

Neither the Mayor, TfL nor the GLA has a coherent transport policy on cycling, which will predictably fail even to reach the Mayor’s paltry and unambitious target of 5% modal share by 2026.

Instead of a policy we have the conventional quack remedies, i.e. to

TfL and the Mayor will continue to encourage changes at borough level through Local Implementation Plans (LIPs), which can have a positive impact on the walking and cycling environment.

No they won’t. Every LIP in Greater London has failure built into it. The London Borough of Waltham Forest’s LIP is car-centric to the core and not significantly different to any other London borough LIP. No London borough has a meaningful strategy for creating mass cycling. In any case LIPs are inherently meaningless documents which serve the cosmetic function of meeting certain statutory requirements regarding the Mayor’s transport policy. LIPs emerge from the same vehicular ideology that pervades TfL (and indeed all local authority transport planners have formal and informal links with TfL and are part of the same car-centric culture).

TfL with its car-centric obsession with ‘Network Assurance’ and ‘smoothing traffic flow’ is bad enough, but some boroughs are even worse than TfL. Newham, for example.

Newham council seem to be actively spending time and making decisions that impede cycling in their borough. The major roads in their borough are a car-choked and polluted mess that is unpleasant even for the motorist, and worse for other road users. Their actions over the CSH and the Stratford regeneration clearly indicate that they have absolutely no intention of trying to change this, and show that they don't care about cycling at all.

If you want to get people out of their cars and onto bicycles you have to completely restructure the urban environment as the Dutch did from the mid-1970s. You halt the absurd situation where people can lawfully park in cycle lanes. You introduce extensive road closures to deter rat-running and make residential areas impermeable to all but those who live there. You start getting rid of the private car from wholly inappropriate locations such as central London and high streets. It’s a grotesque absurdity that private car owners can drive along roads like Oxford Street and Regent Street. And you start the whole process off by imitating the Dutch and building bike grids – safe, segregated cycle paths that take you in a direct line to urban centres, putting the bike before the car and giving cyclists priority at all junctions.

There is no sign at all that anyone in the GLA has understood this. Instead we get some pitiful blather about car clubs. We are supposed to be cheered by the news that anti-cycling Islington Council

has signed a contract with a private supplier which aims to get 20,000 car club members by 2015.

criticised the Mayor’s lack of direction on the issue of road pricing, which it argues is essential to managing the future of the road network.

The GLA Transport Committee has organised a public meeting with invited guests as part of its investigation into congestion on the road network.

The following guests have been invited to attend this meeting to discuss congestion on the road network:

In other words, business as usual. These are the very last people you should be consulting if you really want to turn London around, unclog its streets, and reduce dependency on the private car. Of course the process of undertaking that might well in the short term lead to greater congestion. Or it might result in that other phenomenon which car-sick London’s car-centric, car-driver-pampering transport planners are in complete denial about, i.e. traffic evaporation. In other words, a good start would be to close Blackfriars Bridge to all motor traffic.

Posted by freewheeler at 11:31