Going round the bend on Alexandra Road, Leyton 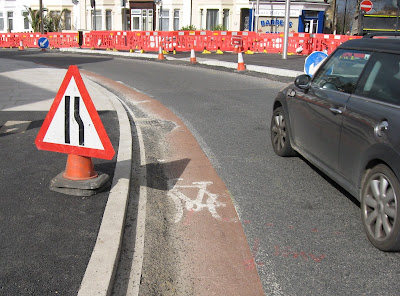 Last month The Grumpy Cyclist reported on the first stage of the Alexandra Road ‘improvements’.

Alexandra Road (A106) is one of the major commuter routes between Leyton and Hackney/the City. It’s also a leading route to the Olympic site.

It forms part of a one-way system/mini-gyratory with Ruckholt Road. Cycling on this route is stagnating.

Continue on past the stretch shown in the Grumpy Cyclist’s pic and you turn sharp right, then sharp left. The photo above shows the sharp left turn. The latest ‘improvements’ involve narrowing the carriageway, forcing cyclists into conflict with high volumes of traffic, including many lorries. The vehicle shown in my pic is a mini, and if this is how close a mini comes you can imagine what it will be like with an aggregates lorry. Probably another meaningless cycle lane will be painted on the renewed carriageway surface.

Few people are prepared to cycle on roads like these, a fact no one seems very interested in acknowledging. The Alexandra Road disaster is in the same spectrum of urban transport folly as the ‘improvements’ to Blackfriars Bridge.
Posted by freewheeler at 14:05