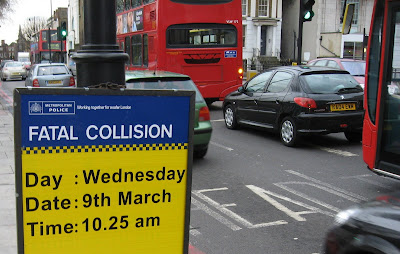 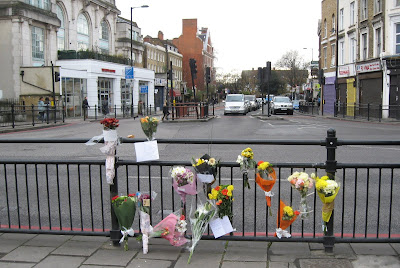 This is the junction in Hackney where last Wednesday an elderly woman pedestrian, who was apparently using a walking stick, was crushed to death by a massive 22-wheel lorry. The driver was arrested.

The lorry driver was evidently turning right out of the A107 on to Urswick Road (A102). My impression is that the pedestrian was probably hit on the crossing and then dragged under the lorry, although this is purely speculative. As we know, there’s a blind spot under the windscreen of some lorries, so that drivers don’t see even quite large objects.

The signalled crossing here is one that requires pedestrians to cross in two stages, to the middle where they wait in a cattle pen. It’s an atrocious junction. There are no ASLs for cyclists, some of whom jump the lights. Impatient drivers also flagrantly jump the lights, after the amber light has turned to red. Some pedestrians ignore the cattle pen or run across at red to get to the other side before the green light goes out. 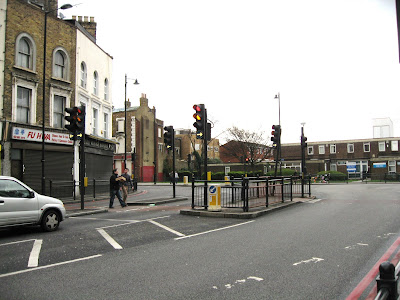 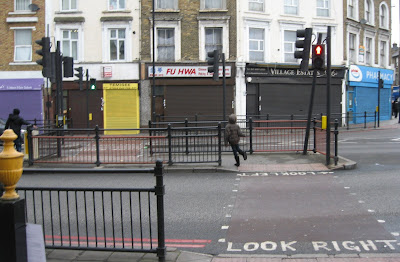 It’s a spacious junction which prioritises motor vehicles. There would be the space to separate cyclists from motor vehicles here, and also reduce the length of carriageway which pedestrians have to cross to get to the other side, allowing them to cross in one go. However, that would impinge on ‘smooth vehicle flow’ and would be anathema to TfL.

An interesting new piece of research Deaths of cyclists in London: trends from 1992 to 2006 blows away some of the cherished superstitions of the vehicular cycling fundamentalists. For example, there’s no 'safety in numbers' :

We did not replicate, however, the findings of previous studies which have suggested that increased levels of cycling lead to decreased fatality rates

the data in STATS19 appears to underestimate the severity of injury, such that only about two thirds of serious injuries were classified as such.

Other cherished illusions also disintegrate. The cyclists who die under the wheels of lorries are not ‘novices’ and the drivers who kill them are not inexperienced lorry drivers:

“lack of experience of drivers or riders does not appear to be a problem.”

The problem of [left] turning goods vehicles has been analysed in depth in another paper, which highlights that the principal contributory factor is the limited field of vision from the driver’s cab of nearby road objects. This is because freight vehicles are not designed for urban environments such as London, instead being intended for transporting goods on large, suburban roads and motorways with freeflowing traffic and few vulnerable road users.

To prevent cyclists being killed by HGVs, large freight vehicles (>3.5 tonnes maximum laden weight) should be removed from urban roads and more appropriate means of delivery of essential goods found.

The problem that large freight vehicles cause was highlighted for me on Saturday, when I caught up with this juggernaut (below) which was trying to turn left out of Hatherley Road E17 into Erskine Road. The Council’s policy of allowing as much on-street car parking as possible made it impossible for the driver to turn left, and so instead in the end he gave up and turned right. He was only able to do this by driving over the footway. Because this lorry had a left-hand drive (the registration plate is Romanian) the driver had very restricted visibility and seemed oblivious to the presence of pedestrians on the footway which he was driving across. In order to get past a car driver came on to the footway where I was standing and drove past.

And what was this massive vehicle doing in a residential area? Apparently carrying donated second-hand clothes for the European rag market, though the company seems to be based in, er, Hackney. 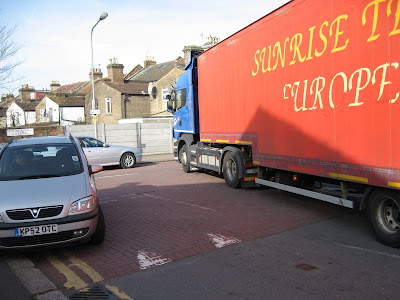 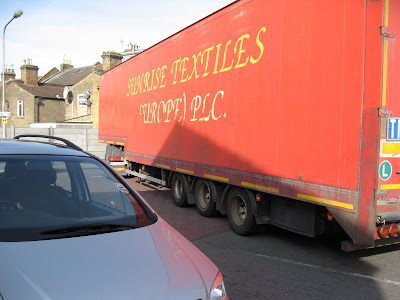 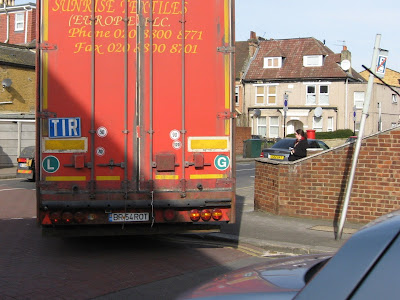 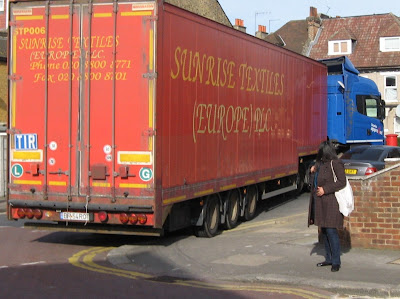 Posted by freewheeler at 14:48