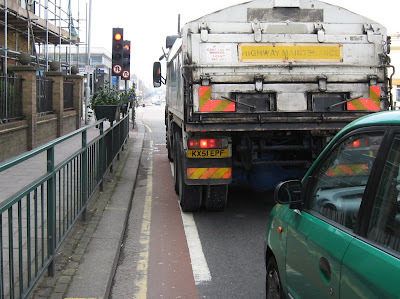 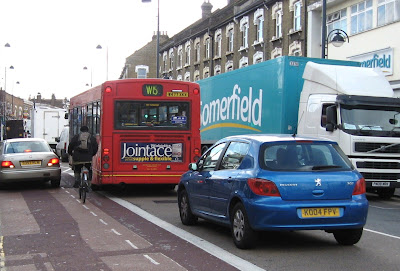 First photo: Infrastructure that meets the London Cycling Campaign definition of making a street ‘cycling friendly’, i.e. a cycle lane leading to an Advanced Stop Line cycling reservoir. Where the A503 (Forest Road) meets the A1006 (Blackhorse Road).

Second photo: Spot the cyclist on High Road Leyton. The car in the bus lane is there quite legally.

The other day I stumbled upon a very recent Transport for London report with the mouthwatering title Analysis of Cycling Potential in London. It is dated December 2010, and in view of its contents I have a hunch it may have been released on the 25th day of that month.

It’s well worth reading if you are interested in how cycling is actually doing in the capital. It’s the only report I’ve ever come across which itemises the number of daily cycling trips in every single London borough. A formula is established to calculate how far each London borough has realised its cycling potential. In Newham, unsurprisingly, it’s only 2%. Waltham Forest has achieved 5% of its potential and Hackney 24%.

The really stunning revelation of this report is this one:

Got that? There were no more cyclists riding bicycles in Greater London in 2008 than there were seven years earlier. Cycling is stagnating.

Contrast that with the CTC’s claim that London has seen a 91% increase in cycling since 2000.

Yes, there are more trips made by bicycle, but NOT MORE CYCLISTS. It’s yet another reason why the CTC’s entire ‘Safety in Numbers’ thesis is not persuasive. (The 91% figure is also bogus because what is measured is not 'cycling in London' but cycle trips on just 29 cherry-picked ‘A’ roads in Greater London which have high levels of commuter cycling.)

As the authors of the TfL report make clear, the figures do not mean that the people cycling in 2008 are the same people who were cycling in 2001. The stagnation of cycling on the surface conceals turbulence beneath it – what is identified as ‘churning’, i.e. new people are attracted to cycling but their statistical contribution is cancelled by an equal number of people giving up cycling:

although many people have taken up cycling in the past decade, a similar number have stopped cycling - i.e. there has been “churn” but no change at an aggregate level.

What the report devastatingly reveals is that measuring cycling purely by trips creates a wholly false image of cycling becoming more popular:

Much of the growth in cycling since 2001 has been driven by existing cyclists making more trips by bicycle.

The report acknowledges that

Research exploring the barriers to cycling and the factors which would encourage people to cycle more found that frequent cyclists were more likely to be put off by their experiences with traffic and other road users and to mention practical barriers, such as a lack of suitable parking or shower facilities (TfL Cycling Behaviour Survey 2010). For all groups, including frequent cyclists, safety was the most significant barrier to cycling in general and for specific trips. This suggests that, in order to realise the remaining potential from existing frequent cyclists, practical measures to increase safety and improve the provision of facilities will be the most effective.

Of course what those ‘practical measures to increase safety and improve the provision of facilities’ amount to is left nebulous.

If you believe, as I do, that the only way to make cycling a mass activity in London is to imitate the successful Dutch example, then the future is very bleak indeed. The Mayor has no coherent strategy and his target of 5% modal share has been severely criticised, even from a vehicular cycling perspective. Transport for London remains car-centric to its core and its primary obsession is accommodating motor vehicle flow, irrespective of why or where journeys by private car are made. As we know from Blackfriars Bridge, no matter how dense cycling levels become TfL is determined to put motor vehicles before cyclists.

At a local authority level, the primary policy objective remains encouraging the ownership and use of the private car for very short journeys. Street space in catastrophically failed cycling boroughs like Redbridge and Waltham Forest continues to be reallocated to the private car, even, incredibly, involving the seizure of cycle lanes and footways.

At a campaigning level the CTC continues to insist on ‘the right to ride’ in conditions which have long since lost their appeal for most normal people. The London Cycling Campaign likewise focuses its interest on the kind of infrastructure which is beneficial to the capital’s very small numbers of vehicular cyclists (mainly white male professionals aged 25-45) but a deterrent to the wider community in terms of age, gender, class and ethnicity.

Cycle campaigners remain focused on vehicular cycling ‘improvements’, i.e. the strategy that lots of small initiatives – more cycle lanes, road closures, contraflow lanes, 20 mph zones etc – will lead to ever-greater numbers of cyclists, which in turn will lead to a critical mass resulting in a radical transformation of our streets away from the motor car.

(Below) A section of the London Borough of Waltham Forest’s prize-winning 20 miles of cycle lanes. 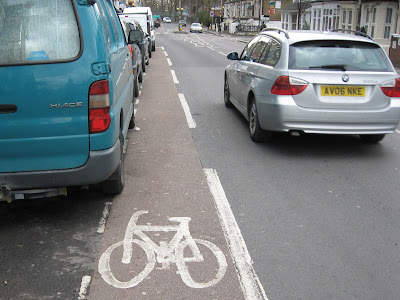 The Hackney branch of the London Cycling Campaign, for example, asserts that

The reform of the major one-way systems in the area remains our chief ambition, together with the huge increases in cycling which this will release.

Now don’t get me wrong. I hate gyratories and one-way streets, and I would like to see the end of the Stoke Newington gyratory (which represents a major challenge for the southbound A10 ‘Cycle Superhighway’). But where is the evidence that opening up these systems for two-way vehicular cycling will result in ‘huge increases’ in cycling? There is none that I am aware of. Even if the Hackney cycling campaign achieves its ambition, it does nothing to reduce the number of cars being driven in Hackney.

Only the Dutch have achieved such ‘huge increases’ in cycling and their approach – separating cyclists from motor vehicles - remains quite different to the campaign strategies of British cycling groups and organisations. The Dutch have a proven record of success whereas British cycle campaigning is built on demonstrable failure and, year after year, boundless supplies of empty optimism.

Why did they do that? Traffic. Danger. The inconvenience and unattractiveness of cycling on streets dominated by motor vehicles, where driving standards are often very poor.

The CTC doesn’t see it that way. With typical obtuseness characteristic of an organisation run by vehicular cycling fundamentalists, the CTC sees the problem as being an individual behavioural one:

The last point seems to press the case for schemes that not only encourage people to try cycle commuting, but incentivise them to keep going – e.g. CTC’s Workplace Challenges.

A Workplace Cycle Challenge pits organisations - and individual departments within them - against each other to see who can get the most staff to cycle for at least 10 minutes during a two or three week Challenge period. The organisations and departments that motivate the highest percentage of staff to cycle, in their size category, win a Participation Award. Spot prizes and other incentives are also used to encourage non-cyclists to get back on a bike and give cycling a go.

Meanwhile, out in the real world, cyclists enjoy ‘the right to ride’ in truly atrocious conditions where you can go under a lorry, be dragged to your death, and nobody even notices.

And if you want to know why cycling will never have mass appeal on the vehicle-dominated streets of Greater London, this short video will explain why.