How not to design an off-road cycle path 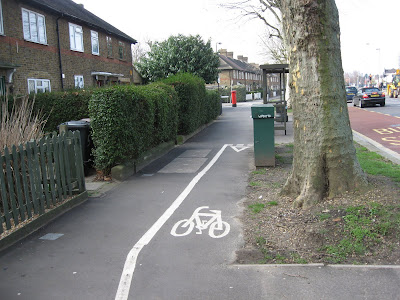 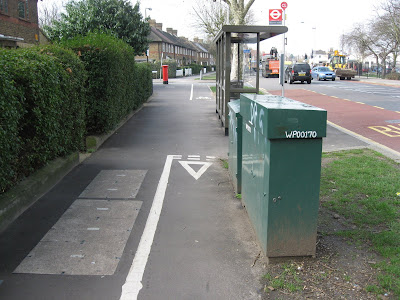 Billet Road E17 (B179) is a wide, fast road that links the Crooked Billet interchange (where the North Circular meets the A112, the main north-south route through Waltham Forest) with Blackhorse Lane and Blackhorse Road station. It’s a very unpleasant road to cycle on because large numbers of drivers are plainly going much faster than 30 mph, and you have the intermittent risk of ‘dooring’ or being cut-up at mini-roundabouts.

The council decided to develop an off-road cycle path for cyclists heading west from the Crooked Billet along Billet Road – a path previously celebrated by this blog here.

Lately this risible piece of infrastructure has been extended, to the point shown above. It reallocates half the footway for cyclists. Naturally pedestrians take no notice and wander across into what is supposed to be the cycle path. The possibility of conflict with pedestrians is much increased, not least with anyone stepping out of their front garden. Meanwhile, alongside it, runs a road which is at this point four lanes wide. In what is a short stretch of cycle path cyclists have to give way for a road, a driveway and three bus stops. It's hardly surprising that off-road cycle paths have a low reputation in the UK when this is the rubbish which transport planners come up with.

This dismal cycle path extension fizzles out at Monoux Grove, where cyclists have the exciting option of a signed ‘quiet route’ through back streets choked with parked cars and a one-way system where, to avoid dooring, you need to take the primary position, resulting in displays of extreme aggression from any boy racer or white van man who happens to catch up with you.

If you choose to shun the 'quiet route' option and continue along Billet Road you will see at a glance that on London’s narrow roads Dutch-style segregated cycle paths just aren’t possible. To prove this I’ve compared the two. Any other way of arranging street space is unimaginable innit. 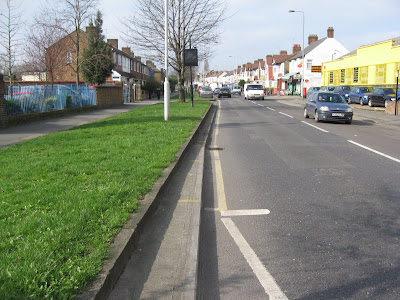 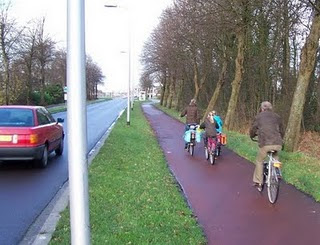