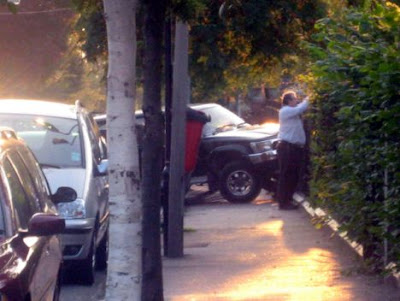 A BABY has died after being hit by a car that swerved off the road outside a school. A black 4X4 Toyota hit 15-month-old Finlay Woods before crashing into the railings of Selwyn Primary School, in Cavendish Road, Highams Park. The 39-year-old woman driver has been arrested at the scene on suspicion of causing death by dangerous driving, drink driving and driving while unfit through drink or drugs. Witnesses, many of whom had gathered to pick up their children from the primary school, described the horrifying moment when they saw the baby trapped underneath the Toyota.

Witnesses today described the accident. Neighbour John Mottley, 53, said: ‘I heard screams and rushed out. The car was on the pavement at right angles to the road. The driver must have turned the wheel substantially. There were lots of people trying to manhandle the car off the baby but it was such a big car there was nothing they could do.’

According to an anonymous witness who comments on the story in today’s Standard the woman driving totally took out the school gates and barrier on the pavement plus had damaged other cars on the road.
Posted by freewheeler at 11:21