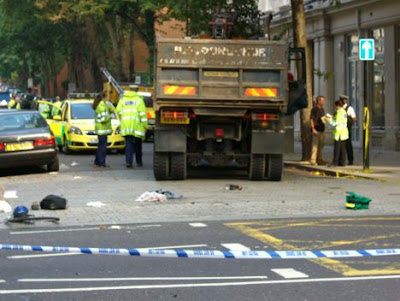 Witnesses said the man, in his twenties, was knocked off his bike and crushed under the front wheel of a lorry turning left from Kensington High Street at about 9.20am.

Two hours earlier, another cyclist was killed when he was hit by a heavy goods vehicle in Upper Thames Street.

The Standard carries the same story in identical words, but with these two comments which are worth reproducing:

This is the 8th London cyclist to have died as the result of a collision with a HGV/LGV/lorry in 2008. There's a narrow cycle lane at this site on Upper Thames St with lots of metalwork in the ground. Additionally there are bollards along the edge of the pavement and often pedestrians waiting to cross.

That all adds up to any cyclist using the (far too narrow) cycle lane having NO escape route whatsoever. Expecting all but the tiniest minority of motorists to have any concept of allowing an escape route for other vehicles not even in the same lane is naive in the extreme.

We shall have more and more HGVs on London's busy roads leading up to 2012, and drivers are STILL killing cyclists and getting away with derisory fines, and blind spot mirrors are STILL not compulsory for HGVs.

The other part about this particular cycle lane is that it restricts the roadway and should never have been put in the first place, the road is too narrow for the addition of 'restricted' road space. It then forced all the motorcycles that previously shared the centre space between rows of traffic with bicycles to use the new cycle lane perched at kerb; the latter being on particularly poor repair.

We must encourage more cyclists to make the roads safer, enforce existing road traffic laws and clamp down on killer drivers.

A COMMUNITY campaigner was killed when her bicycle was crushed under the wheels of a cement mixing lorry on Islington's most dangerous road. Lisa Pontecorvo, 64, of Thornhill Square, Islington, died on Monday at the junction of Holloway Road and Fieldway Crescent - on a dedicated cycle crossing a few hundred metres north of Highbury Corner.

Over at Moving Target, Buffalo Bill has more information about today’s fatality, with comments and links, here.

Update Friday 19th: a range of comment and suggestions in today’s Standard.

Lorry drivers should be made to watch footage of fatal bicycle accidents in a bid to reduce the number of riders killed on the roads, it was claimed today.
Posted by freewheeler at 19:53