NOT 'working for a safer London' 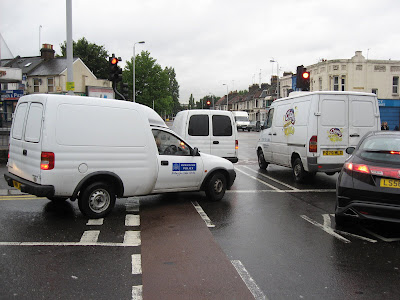 Working for a safer London is the slogan of the Metropolitan Police, and it is shown here on the driver's door of this police van, reg. V181 JGU, which was wilfully obstructing the cycle lane on Forest Road at the junction with Howard Road E17 at 3.12 pm last Friday. The lights are at red. Both the driver of the police van and the driver of the black car ignored the KEEP CLEAR sign on the carriageway.

The white van in the right hand lane is respecting the ASL for cyclists, the white van in the left lane has stopped in the ASL, which is an offence. Worse, it is signalling left. Nothing unusual in any of this, of course. Scenes like this occur at this location hundreds of times a day.

This photo simply underlines the reality that drivers of police vehicles show as little consideration for cyclists as numerous other drivers. As far as cyclists and pedestrians are concerned the Met is NOT 'working for a safer London' but is in reality centrally implicated in making London a very dangerous and unpleasant city for walking and cycling. Enforcement of road traffic law is a low priority and the investigation of road fatalities receives far less resources than murder, even though far more people die on London's roads each year than are murdered. Unfortunately the only critics of this aspect of London's policing seem to be Jenny Jones of the London Assembly and the small campaigning organisation RoadPeace.

Footnote. I caught up with the police van as it turned into Walthamstow police station. I assume its female driver was a WPC.

Posted by freewheeler at 07:25