Yet another major smash on Forest Road 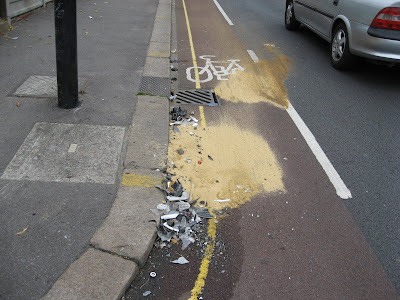 Barely two months after this and at almost exactly the same spot, there has been another major smash on Forest Road:

AN accident closed Forest Road in Walthamstow in both directions (Tuesday). The two-car crash at 9am between Woodstock Road and Hale End Road caused major delays as traffic was diverted through side streets. A 39-year-old man who was trapped in a car was cut free by firefighters.

When I pedalled past all that was left was a residue of wreckage, which had been thoughtfully left scattered in the cycle lane. It was the puncture-inducing variety, full of sharp fragments.

Judging by the sand the collision took place in the cycle lane, which means that if a cyclist had been passing when these two cars collided the cyclist would probably have died or suffered serious injuries. I don't know what happened but it may be significant that two lanes of fast moving traffic shrink to one lane at this point, which means that drivers jockey for first place. A driver in the slow lane runs the risk of being cut up by a driver in the fast lane, and the only place left to go is the cycle lane.

The council’s own figures suggest that cycling numbers on Forest Road are in decline, which may be a reflection of the fact that this is a road which is risky and unpleasant to cycle on, where hundreds of drivers break the speed limit every day, and scores more can be seen chatting on their mobiles. Forest Road needs speed cameras along its entire length, but plainly nothing is going to be done until there is a really spectacular crash which kills lots of people.

Ironically, yesterday’s crash took place beside the black pole which used to support a speed sign which flashed at drivers exceeding 30 mph. This sign was removed without explanation some years ago, presumably for repair, and has never been put back. The kind of negligence you’d expect from a crap council like the London Borough of Waltham Forest. 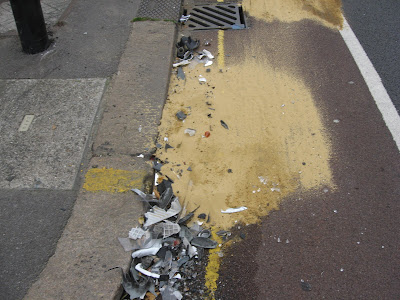 Posted by freewheeler at 07:11