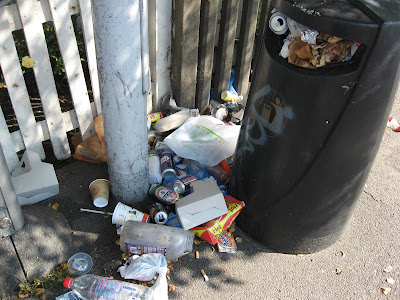 As you enter the borough from Tottenham on the A503 you pass a sign which marks the borough boundary, proudly stating that Waltham Forest is the birthplace of William Morris. Then there's a bus stop, with a shelter and... an unemptied litter bin. Yes, Kier are skimping on the job from one end of the borough to the other. I very much doubt if this bin gets much use, so it has probably been in this condition for weeks. And it was just as bad on the other side of the bin (see pic below).

And as for yesterday's post on this topic. The condition of the play area in the Town Square seems to have remained unchanged later in the day:

Angela Spencer, 56, who had taken her grandson Sebastian to play there, said: “It was absolutely disgusting. “There were children playing there and bins had been tipped out - there were dirty nappies on the floor and food everywhere and empty cans and empty bottles. “I come up here every week but I’ve never seen it this bad.” And Mrs Spencer, of Walthamstow, will now no longer be taking two-year-old Sebastian to the park as she believes conditions are too filthy. “You can understand a bit of litter but this is disgraceful,” she said. “Everyone was leaving - it was absolutely awful.”

(I didn’t spot any bins that had been wilfully overturned, just bins which hadn’t been emptied and which accumulated more and more litter.) 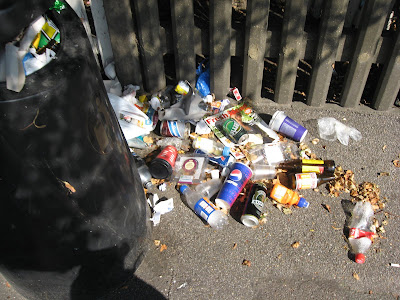 Posted by freewheeler at 06:59