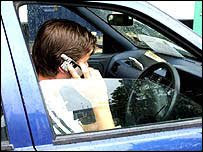 The increased danger to other road users by drivers who use handheld mobile phones is well known:

Research shows that reactions times are about 50 per cent slower and that people are four times more at risk of being involved in a collision, when driving and on the 'phone.

In spite of the growing numbers of cyclists, pedestrians and others killed by those who make the conscious choice to drive while chattering into a handheld mobile, it is an activity tacitly encouraged by both the government and the police. Three penalty points and a £60 fine is absolutely no deterrent for a lethal activity where the chances of being caught are negligible. And the police do not regard enforcement of this law as a priority. That might change if the government introduced legislation which meant that offenders automatically lost their license but no such legislation is on the horizon. Hundreds more cyclists and pedestrians will die at the hands of mobile phone drivers before a future government grudgingly changes the law. The current legislation is a spectacular failure but no politician or senior police officer appears at all concerned.

This situation was brought home to me last Friday afternoon as I watched the female driver of OV55 YWJ steering her car along Hoe Street (2.20 pm) with one hand, while with the other she was engrossed in a conversation on her handheld mobile phone. The car behind her was a marked police car, with two officers inside. And what did they do? You guessed: nothing at all. Incredibly, two cars behind the police car was another driver chatting into a handheld mobile phone. London drivers have certainly got the message: the police don't care.

On Monday at 3.30 pm the male driver of a lorry reg. MX51 GYF turned out of Church Hill E17 into Hoe Street, with the driver steering with one hand while chatting into his handheld mobile on the other. This prospective mass killer was utterly indifferent to the scores of pedestrians including children at this location.

When it comes to London’s crap traffic policing Jenny Jones of the London Assembly has described the difficulties: The Met Police halved the number of traffic police and regarded road safety as a very low priority. Drivers have spent the last decade or more thinking that they can break the law in London and get away with it. The result is that in some parts of London, a quarter of all people injured in traffic collisions are victims of hit and run drivers.

Each week in London 80 people are the victims of hit-and-run drivers. This figure has doubled in the last two decades. By contrast the number of traffic police has fallen steeply over the same period. (pdf)

The Metropolitan Police has failed to treat road crime with the seriousness it deserves. London’s roads are becoming increasingly lawless in several dangerous ways. This report describes the rise in “hit-and-run” incidents, the widespread evasion of vehicle tax and insurance, and the declining enforcement of traffic offences not detected by electronic devices, such as speed cameras. Cuts in the number of traffic police have lead a minority of drivers to believe that they can break the law with impunity. Yet, an increase of 8,000 in the total number of police officers in London over the last six years provided the Met Police with ample opportunity to make road safety a priority . More people die on London’s roads than are murdered. Most road deaths are preventable, yet several times more resources are devoted to murder investigations than to road death investigations. The lack of priority given to road crime is demonstrated by the current reluctance of the police to prosecute drivers who injure cyclists or pedestrians, in the absence of independent witnesses . This dismissive approach is not adopted towards the victims of car theft, burglary, assault and other crimes.

The latest example of this state of affairs occurred this weekend:

A driver ran off leaving a man and a woman dead on the pavement after hitting them in his top-of-the-range £84,000 BMW yesterday. The victims – a man aged 47 and a woman aged 21 – were walking home after a night out when they were struck by the car, which also hit a parked Mercedes.Witnesses saw the driver get out of his 155mph black BMW M6, look at the couple lying on the pavement and then run away from the scene, in Perivale, West London.

supplied equipment to cannabis growers, reasonably foreseeing that the items would be used illegally.

The convictions were quashed, but only because

it was not proved that anyone had used the equipment to grow cannabis.

By the same logic the police should be raiding every car manufacturer and car sales outlet in Britain. They are all involved in supplying equipment – namely cars designed to be driven at speeds in excess of 70 mph – reasonably foreseeing that these cars will be used illegally. Obtaining convictions shouldn’t be a problem, with the evidence available every day of the week.

But though the Met turns a blind eye to killers on the road, it is enforcing some aspects of road traffic law:

A CRACKDOWN on cyclists who flout the law by riding on pavements netted one rider every four minutes. Police officers caught the offenders during a 90-minute purge in Stoke Newington High Street on Thursday morning last week. The cyclists were using the stretch of pavement to avoid going through the Stoke Newington one-way system. Twenty-one cyclists were hit by £30 fines for flouting the law. Officers issued 19 fines for cyclists on the pavement and a further two for going through red lights.

Of course if the Met chose to enforce the law supposed to deter drivers from stopping in Advanced Stop Lines for cyclists they would 'net' rather more than one offender every four minutes.

The Stoke Newington one-way system is a perfect testament to the contempt with which cycling is treated by London’s transport planners. There is ample space for a contraflow lane, to save cyclists the effort of a long and pointless diversion from their preferred route. Instead of which cyclists are expected to negotiate their way around a two lane race track.

Cyclists shouldn’t be transferring their inconvenience and road danger to pedestrians, of course. They should be out there in their hundreds protesting about London’s prejudicial traffic design and prejudicial policing. Sadly, there is no effective cycling campaign group in London. The LCC strategy of asking nicely isn’t really getting us anywhere, is it? What London needs is a militant cycling campaign which can manage the courage of a 92-year-old
Posted by freewheeler at 09:29