One-way streets are proliferating in Greater London. The reason is to make motor traffic flow more smoothly. In the London Borough of Waltham Forest more and more residential streets are being converted to one-way, because as vehicle ownership levels increase streets are filling up on both sides of the road with parked cars. The gaps where drivers could once pass no longer exist.

But every new one-way system represents the theft of road space from cyclists. The convenience of cyclists is only very rarely considered by highway engineers, who are generally obsessed with motor vehicle flow and car parking. Pedestrians are also paying the price of increasing vehicle ownership (which is often the result of affluent households acquiring three or four vehicles), as more and more pavements are exempted from the pavement parking ban, to accommodate the parking of more cars and bigger cars such as 4X4s.

These thoughts are prompted by an item in last week's local paper. Abuse from cyclist who was going the wrong way is one of the headlines on the letters page of The Waltham Forest Guardian (September 18).

A motorist from Chingford writes in to complain:

I was driving down Selwyn Avenue, Highams Park, towards the school, and coming towards me on the road was a cyclist. I flashed my lights and called “You’re going the wrong way.” All I received was loud, violent and abusive language, tamest of which was “so what!” finalised with a filthy spit onto my thankfully closed window.

Don’t they have to follow the same rules of the road as other road users?

Perhaps the bikes ought to require MOT certificates, insurance and indeed, a road tax disc just as car users do.

Now let’s assume that this incident occurred just as the driver said it did, and let us condemn the cyclist for his or her offensive response. But let’s look at the wider context. Why was this section of Selwyn Avenue designated one-way? Answer, because both sides of the street are lined with parked cars, put there by residents who lack off-street parking. This creates problems for two-way traffic, as there isn’t room for two cars to pass.

The borough’s highway engineers therefore designated it a one-way street. But cyclists nowhere came into consideration. Cyclists who had always cycled along this stretch of the road in this direction suddenly found that their journey was illegal.

Selwyn Avenue is where two dedicated cycle routes meet. The Chingford ‘quiet route’ allows cyclists to cut through the road closure on Nelson Road E4 and continue along the first section of Selwyn Avenue. They then encounter NO ENTRY signs. (See photo below) Other cyclists can come from the dedicated cycle route beside the greyhound stadium and the Ching. If you are heading for the local station, Larkshall Road, The Avenue or Hale End Road, then this section of Selwyn Avenue provides the quickest route.

The Council encourages cyclists to use quiet routes and then puts NO ENTRY signs in their way and expects them to go a longer way round. But why should cyclists, when further along their route is Winchester Road? That is a horrendously narrow, fast, dangerous road to cycle on.

There is no rational reason why cyclists should not ride along Selwyn Avenue against the one-way system, since there is as much space between a bike and a car as on many two-way roads in the borough. 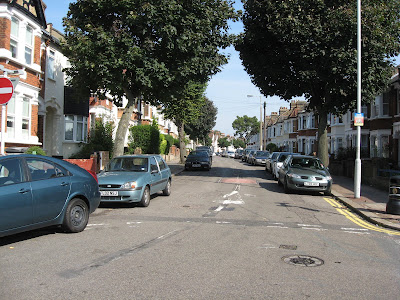 NO ENTRY The one-way section of Selwyn Avenue

The one-way system is in reality design discrimination, which prioritises car parking and car movement at the expense of the convenience of cycling. It’s the same logic which degrades pavements for pedestrians by exempting them from the pavement parking ban, for the sake of residents who want to own cars and have no off-street parking. London is crammed with design discrimination of this sort but it is rarely recognised as such.

The solution, of course, is to allow cyclists by law to use ALL one-way street in the 'wrong' direction. There is almost always room for a cyclist and a car to pass safely, and with a little goodwill on both sides the same goes for lorries and cyclists. One-way streets usually require traffic calming anyway, so vehicle speeds are slow. Drivers would, of course, require educating in this new law, and should be obliged by law to slow where necessary and give way to cyclists.

The person who wrote to the local paper displays the characteristic complacency of a certain kind of driver. Since there is ample room for a cyclist to pass in the one-way section of Selwyn Avenue it is not clear why the driver felt obliged to flash his lights and shout at the cyclist. Secondly, the driver gives his address as a road about a mile away and says he was driving to the nearby school (perhaps to collect a child). The driver accepts this as the natural course of things. All I see there is the complacency of a motorist who thinks a one-mile car journey puts him at the centre of the transport universe.

There is of course one final bitter irony to this letter. On the same day it was published, complaining about a cyclist on Selwyn Avenue, a resident of this same road climbed into her Toyota Land Cruiser, drove it round the block, and crashed into the entrance of the local primary school, killing baby Finlay Woods. Those drivers who write angry letters complaining about cyclists show very little sense of perspective, and expecting all cyclists to obey the rules is optimistic where road lay-outs discriminate against their safety and convenience and when drivers flout the rules of the road with impunity, to far more deadly effect.
Posted by freewheeler at 07:55