Get rid of the railings 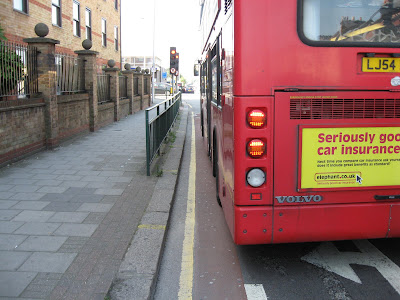 The cycle lane, Forest Road (heading towards Tottenham), junction with Blackhorse Road. The bus driver has chosen to obstruct the cycle lane rather than go into the outside lane. The ASL looks to be free of traffic. I could squeeze through the gap, but I wouldn't. I might collide with a pedestrian crossing in front of the bus. Or the bus driver might suddenly drift even further into the cycle lane. Or the lights might change, leaving me trapped beside an accelerating bus.

If planners are going to put cycle lanes at sites like this they should physically segregate them from motor traffic. And Advanced Stop Lines need to be much, much bigger. Another problem is the railings. They are a death trap for cyclists. Anyone in the cycle lane who is hit by an overtaking vehicle is just going to slam against the railings, bounce back and go under the wheels.

Railings like these are opposed by pedestrian campaign groups, who resent the traditional highway engineer's cattle fence approach to managing walking. But they are even more deadly for cyclists. The only real justification for railings is at very limited sites such as school entrances, where they may prevent a child impulsively dashing across the road. Everywhere else they should be torn up and got rid of - especially at major road junctions.

Footnote. A new website has just been set up by a group of London cyclists concerned by the latest fatalities. It is devoted to safer cycling and you can find it here. 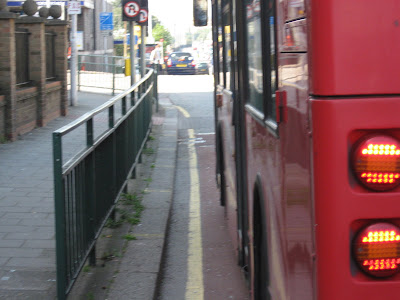