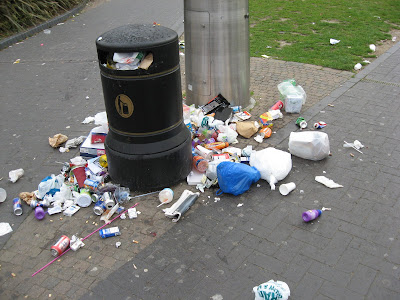 Anyone visiting the shopping mall yesterday and arriving from the bus station or the tube/overground had to walk past this.

These photographs show the state of the Town Square at 10 a.m. yesterday morning (Monday). Welcome to Walthamstow, possibly the filthiest place in Britain. Yes, enter the magical world of New Labour/Lib Dem neo-liberalism, where you can cut the cleaning budget by £600,000 and things are bound to get better...

Rubbish is still piling up on the streets of Waltham Forest. Just two weeks ago we revealed how anger towards Kier Street Services, the organisation which is paid by the council to keep our neighbourhoods clean, was mounting by the day. Some residents claim their streets have become so infested with uncollected rubbish, they have had to grab brooms and sweep them themselves. And in an area where the average Band D tax payer forks out £1,440 a year in council tax, local people have threatened to withhold payment and have fired off petitions to the local authority.

In response, environment councillor Bob Belam declared earlier this month: “No part of the borough will be ignored or passed over in our efforts to make Waltham Forest a cleaner place.” But Kier are still doing a sub-standard job and the Guardian has demanded Cllr Belam lives up to his promise. 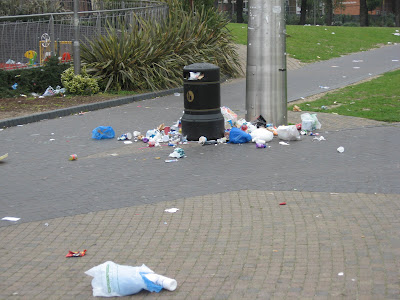 (Below) Who wouldn't want to sit down in the Town Square and relax and absorb the local atmosphere? 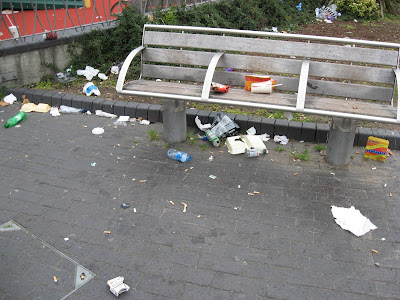 (Below) 'REVITALISATION OF TOWN SQUARE AND GARDENS' is the boast on the large board. The photograph after it shows what's directly underneath this board... 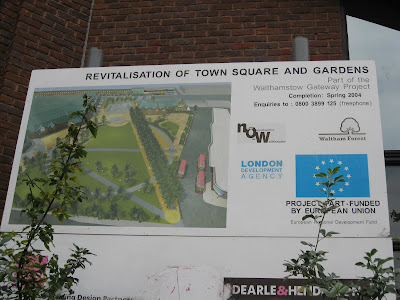 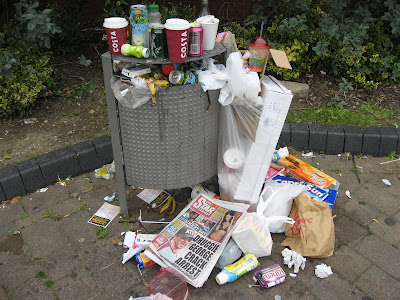 The next three photographs below show the state of the children's playground: 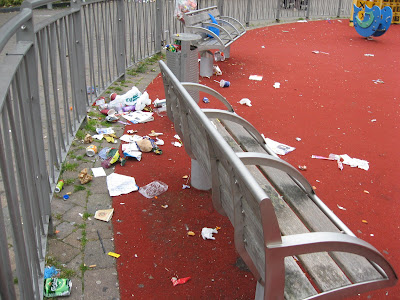 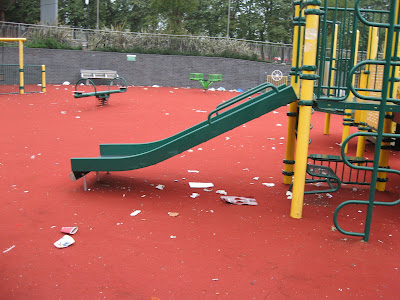 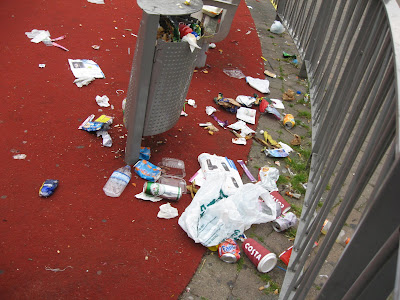 Who should we hold accountable for this state of affairs? There are four individuals, I think. Why not drop them a line? If you want to refer them to these photographs, the link is:


Martin Esom, the Council's Executive Director of Environment and Regeneration, is paid a whopping £115,133 a year. You can communicate with Mr Esom at this email address:

Councillor Bob Belam, cabinet member for Environment and Regeneration, whose allowances for 2007-8 came to £31,653.60. His contact details are here

The Labour leader of the council is Clyde Loakes, whose allowances for 2007-8 came to a grand total of £51,054.10. His contact details are here

The Liberal Democrat deputy leader of the council is John Macklin, whose allowances for 2007-8 came to £31,653.60 (that was before he was elected leader of the Lib Dems locally; his allowance will increase by over £7,000 in the current financial year). His contact details are here

If you feel like communicating with one of your ward councillors, the email addresses of London Borough of Waltham Forest councillors are listed here.

You could also write a letter to Pat Stannard, editor of the Waltham Forest Guardian:

(Below) More litter, on the steps below the so-called 'Big Screen' 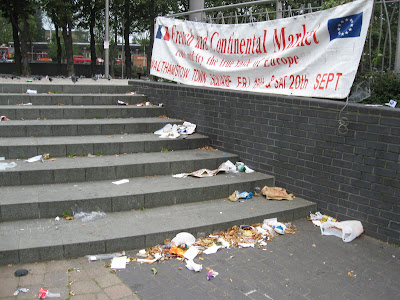 (Below) Another overflowing bin, on the bus station side of the Town Square, by the bank. 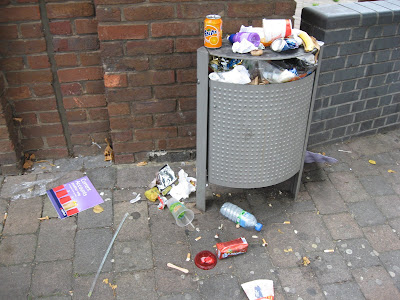 (Below) Litter strewn across the entrance to the central library and the post office. 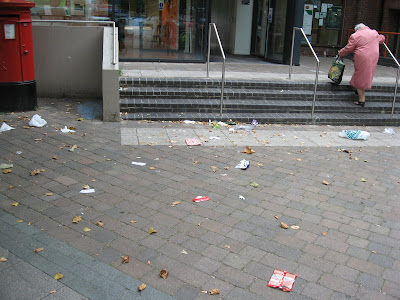 Posted by freewheeler at 06:58