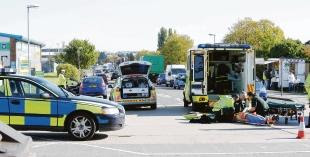 A CYCLIST was taken to hospital with back injuries after a collision with a car on a Basildon industrial estate.

The details are sketchy and it is quite impossible to arrive at any explanation of this collision or to attribute blame. But it provoked two immediate comments from Association of British Drivers type people, for whom the motorist is always innocent and the real problem lies with the victims:

I wonder about the circumstances though because so many cyclists think they dont have to obey the rules of the road such as red traffic lights etc...

I agree, too many cyclists ignore road signs and traffic lights. Mind you, pedestrians are just as bad - most of them don't realise there is a section of the highway code telling them how to behave on or near roads.

This is tunnel vision taken to an extreme. There is no more violent, anti-social and lawless social group than drivers, whose contempt for speed limits is evident everywhere, from the motorway to the residential street, and whose recklessness and inattentive driving kills around 10 people every day in Britain.
Posted by freewheeler at 11:12