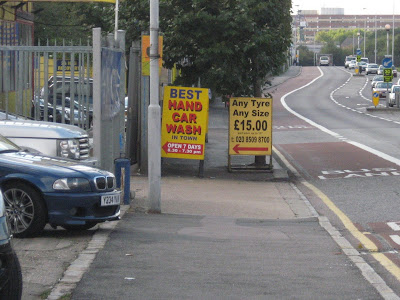 (Above) We've had a quarter of a century of policy documents at a national, local and London-wide level, all of which blandly promise to improve the walking environment and clear pavements of clutter. And every local authority in London permits scenes like this (Forest Road E17, west of the junction with Blackhorse Road).

Yesterday the Mayor’s new transport strategy for London for the period up to 2031 was released.

I’ve eagerly read what it had to say about cycling and walking, and about transport in Outer London, where I walk and cycle.

Like all politicians, Boris wants to be everybody’s friend. But I would argue that you cannot make conditions better for pedestrians or cyclists without curbing the traditional privileges of the car driver.

How about this for a fundamental contradiction:

The car will continue to have a role to play for journeys that cannot efficiently be catered for by public transport, walking or cycling, and the transport system will allow for car use where appropriate (where cars are used these should be fuel efficient, low emission including electric).

Almost in the same breath we learn that

So, almost all Londoners could travel by bus. Just about nobody really needs to travel by car. But drivers won’t abandon their cars. And why would they want to when buses can be unreliable, slow, expensive and can’t compete for convenience with a car parked outside your home? You could curb car dependency by, for example, removing all parked cars from streets and replacing the empty space with a wide two-way cycle lane segregated from motor traffic by a concrete barrier. You could introduce compulsory workplace car park charges (for the likes of teachers, who enjoy free car parking). But there is no local politician prepared to countenance such radical transformations, outside the Green Party.

The Mayor has made it a particular priority to improve the quality of Londoners’ overall daily travel experiences whether as drivers, pedestrians, cyclists or public transport users.

This is sheer fantasy and fundamentally dishonest, because you can’t improve conditions for, say, cyclists or pedestrians, without slowing down drivers. That’s why locally on the A104 pedestrians and cyclists are diverted down a filthy, neglected, circuitous underpass system instead of being supplied with a simple signalled crossing of the road. When it comes to the crunch, motor vehicle flow is a top priority, and the safety and convenience of cyclists and pedestrians come second.

As far as walking is concerned all we get are the usual bland generalisations, no different to the rhetoric we got in similar policy documents from the Livingstone administration. They were perfectly worthy documents which foundered on generalisation and on the resistance from the car supremacist highway engineering culture embedded in every London local authority.

About one third of all trips within Outer London are made entirely by walking.

If true, that’s an amazing statistic. Because this has occurred in the context of massive discrimination against walking. Walking is devalued and pedestrians can expect to wait far longer at red signals than drivers. Every local authority in London has cynically subverted the 1985 footway parking ban, exploiting a loophole in the legislation to create pavement parking where it previously did not exist. The walking environment continues to be degraded by street clutter, with crap councils like Waltham Forest and Haringey eagerly renting out pavement space for advertising panels which are obstructive and unsightly.

The Mayor could demand a freeze on all new carriageway parking bays and require all local authorities to begin removing all exemptions to the footway parking ban, but of course even that kind of minimal improvement of the street scene is not on the cards, either for the Mayor, or the Greater London Assembly, or any London local authority. In all their hearts, the car remains king.

This sort of bland aspiration has been articulated hundreds of times before:

London will have ‘better streets’ that are free from clutter and unnecessary signs, are vibrant, attractive and enjoyable places to use.

That’s complete crap. The London Borough of Waltham Forest is utterly indifferent to street clutter, and keeps adding to it, and there is nothing whatever the Mayor can do about it.

That’s a joke. Anyone who believes that London is a world leader in promoting walking and cycling is clinically insane. For whatever reason more people are cycling and walking, it sure as hell isn’t because of infrastructure. And any increase of this sort is, I believe, unsustainable under current conditions.

Boris is – a bit of a contradiction here, what - fully committed to car dependency and pollution:

The Mayor has completed an informal consultation on the future of the Western Extension of the Congestion Charging scheme and is now minded to remove it. He has also announced his intention to suspend phase three of the LEZ [Low Emission Zone] and proposes that this is deferred until 2012.

And then we get the ‘more cyclists equals more safety’ fiction:

Increasing levels of cycling will lead to a virtuous circle of increased awareness among other road users and a reduced injury rate.

No it won't. More cyclists on unsafe streets means more deaths and injuries, more near-misses, and most people deterred from cycling. This vicious circle will not be broken without a massive transformation of the cycling infrastructure. That is not on the cards.

Where I cycle (and the shift to cycling has to come in Outer London more than Inner London) law and order has completely broken down. On the streets of Waltham Forest thousands of drivers chat on mobile phones, break the speed limit in dense residential areas, and red light jumping is blatantly obvious at every major junction. The document says absolutely nothing about the role which the Met could play in making London’s streets attractive for cycling – by, for example, removing the one in eight uninsured drivers from our streets, or by enforcing Advanced Stop Lines for cyclists. A prejudiced police force which regards cyclists and pedestrians with contempt is a major impediment to improving conditions on London’s streets. Policing is simply never mentioned. But then the Mayor has no control over London’s police, and the Met has plainly no intention of changing its deeply-embedded car supremacist culture.

And how is Boris going to get people out of their cars?

A greater public awareness of the environmental impact of travel choices and driving style, together with targeted travel planning and car clubs will further reduce transport-related CO2 emissions and tackle car dependency.

That is complete fantasy. The projections for declining car use are as implausible as those for increased cycling:

That’s a dismal aspiration, but even this doesn’t have a bat in hell’s chance of being realised.

Here’s one reason why it will fail:

Growth in freight movements is also expected, with the number of LGVs [Light Goods Vehicles] forecast to grow by 30 per cent between 2008 and 2031, accounting for 15 per cent of traffic on London’s roads.

Boris is also committed to new roads, or in the weasel words of the document

The document also insinuates what we knew already – cycling just isn’t worth wasting money on:

Numerous improvements can be achieved inexpensively just by being aware of cyclists’ needs and integrating appropriate measures into existing projects, such as urban realm improvements.

But if you want a massive shift to the bicycle in Greater London you can't do it on the cheap, with a bit of white-lining on a pavement ('shared use'). You are going to have to spend the kind of money usually dedicated to motorway ‘improvements’. That isn’t going to happen.

And what, concretely, is on offer? More cycle parking at railway stations, the bike hire scheme, and cycling superhighways. Even if successful (and there is already widespread scepticism about those superhighways) these initiatives are not remotely enough to result in a significant shift to cycling. The only one that excites me is the proposal to allow cyclists to go down one-way streets against the flow of motor traffic. But will that be ALL one-way streets? Will there be an 18 mph speed limit on such streets? Will drivers be held criminally liable for collisions unless they can prove they were not at fault? How quickly and comprehensively will it be implemented?

As far as cycling and walking are concerned, this is a document devoid of substance. Most of it is empty rhetoric and the handful of concrete proposals it contains are very unlikely to succeed in encouraging more walking and cycling to any significant degree.

Boris has little or no control over what local authorities do on their streets. Here’s what the London Borough of Waltham Forest (which, like Boris, purports to be the friend of the cyclist and the pedestrian) is proposing to do on local streets in the next twelve months:

These are small, practical measures by a Labour-Lib Dem Council which will degrade walking, make cycling more unpleasant and dangerous, and promote increased car ownership and dependency. And there’s nothing Boris Johnson can do about it, even if he wanted to, which, as a Tory, he doesn’t.


(Below) Oxford Street. The perfect symbol of a capital city which is the most backward in Europe, and which regards pedestrians with contempt. Even on one of the major shopping streets, pedestrians are pushed to the sides and have to make way for motor vehicles. 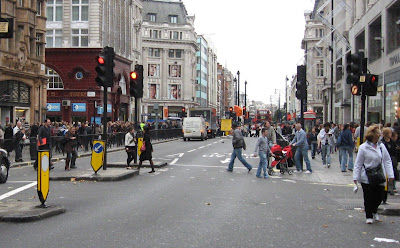 (Below) This driver shouldn't be on Oxford Street at all, but there seems to be no enforcement of the 'buses, taxis and cyclists only' law. The driver is talking on a hands-free mobile phone. There's a bike locked to a traffic sign in the background, because cycle parking is grossly inadequate. And the majority users of Oxford Street - pedestrians - are forced to the sides. 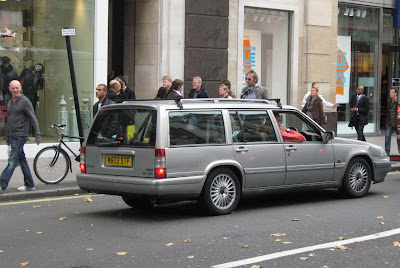 Posted by freewheeler at 08:32