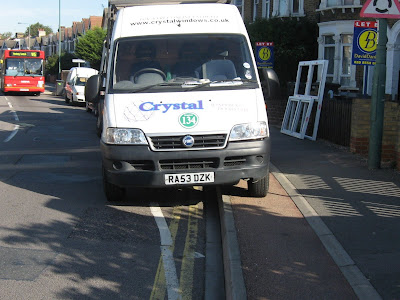 The Council regards cycling as an important mode of transport and almost all main roads in the borough now have cycle lanes.

And as this blog works its way around Waltham Forest’s magnificent cycling infrastructure, here’s the latest impressive example. The cycle lanes on Grove Green Road E11, a.k.a. the A106. All photos taken yesterday.

My first photo shows the superb off-road cycle lane on the eastern side. Distinctly marked out in pink, this generously wide cycle lane on the Dutch model allows the entire family to leave the car behind and go cycling as a group or, in the case of very thin companions, side by side. Double-yellow lines ensure that no driver would ever dream of abusing this vital contribution to safe cycling. For drivers heading south, the removal of cyclists from the carriageway ensures that no one need be troubled by that frustrating and oppressive 30 mph speed limit.

On the western side (below) the start of the cycle lane provides a valuable character-building exercise, as cyclists test their nerve by being forced out into the path of high speed traffic approaching from the rear. Once again note the generous width of the cycle lane (as the Council proudly acknowledges on its website the vast majority of its cycle lanes are a fabulous 1 to 1.2 metres wide - but sometimes of course they just can't help being less than that). 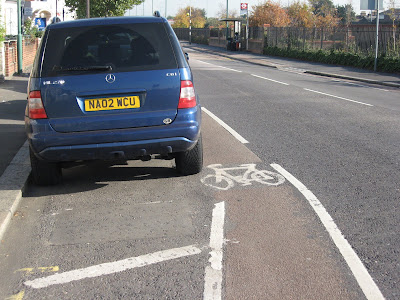 The proximity of parking bays and the lack of any restriction on the size of vehicle which drivers can park there helps cyclists to strengthen their powers of mental alertness as they guard against being ‘doored’ while simultaneously being overtaken. Of course you could choose to cycle outside the cycle lane but this will be perceived by drivers as a wilful attempt to slow them down, and you can expect to hear the hooting of horns and the loud screaming of obscenities. If a road rage driver does decide to run you down, the headline in the local paper will, of course, read: ACCIDENT ON GROVE GREEN ROAD. CYCLIST COLLIDES WITH CAR.

In a hilarious final touch, the council has installed rubber speed cushions. These dismally fail to slow down speeding drivers, instead provoking them into swerving erratically to get through the gaps. This includes swerving into the cycle lane on the west side, or over into the opposite carriageway, even when a cyclist is approaching. 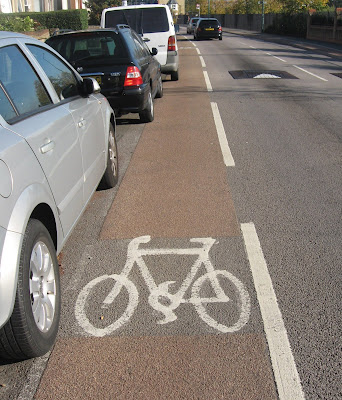 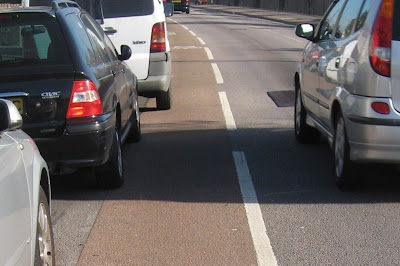 Posted by freewheeler at 09:52