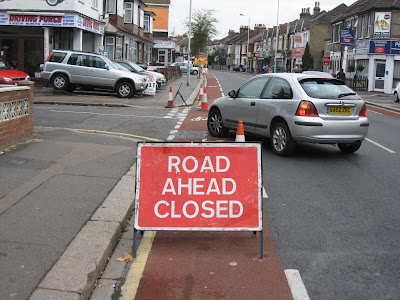 A water main has burst on the A503 in Walthamstow (a major route leading from the M11 motorway into central London), resulting in its closure for between 7-10 days. Traffic has been sent on lengthy diversions.

But ‘traffic’ is a term which never encompasses cyclists. The roadworks make the road impassable for motor vehicles but present no difficulties for cyclists. All you have to do is cycle up to the roadworks, dismount, push your bicycle a short distance along the pavement, and then continue cycling in the road.

But cyclists are simply not considered. There is no need whatever for a cyclist to go on a lengthy diversion on other major roads. But nowhere are the needs, safety and convenience of cyclists considered. If you are cycling west along the A503 you meet the ROAD CLOSED sign at the junction with Palmerston Road. Cyclists wishing to continue on when the lights turn to green find themselves to the left of motor traffic turning left.

If you are cycling east, you’ll find the cycle lane full of signs for drivers (because local drivers who require access or who know how to rat-run through the labyrinth of one-way streets can safely ignore the diversion signs at the Blackhorse Road junction).

The message is clear and it is institutionalised. Cyclists aren’t traffic. They don’t matter. They are of no interest. All that matters is managing motor vehicle flow. 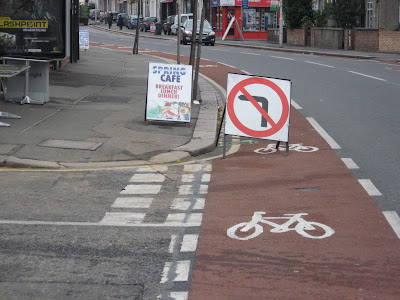 (Below) Pembar Avenue E17. If you use the contraflow for cyclists and want to turn left at the end of the road, you encounter this. All pics taken yesterday. 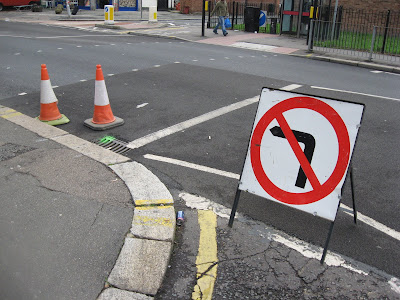 Posted by freewheeler at 10:11