You can't use fiscal instruments to drive people off the road entirely. You simply can't do that. You've got to look at the reality of peoples' lives in Outer London.

That’s right, Boris, out here on the edge of London it’s virtually impossible to function without a car. All we have locally is the Chingford to Liverpool Street overground line, the Victoria line tube from Walthamstow Central to Brixton via Oxford Street, and the Central Line from Leytonstone through Stratford, Liverpool Street and Oxford Street. Then there’s a vast bus service, not to mention those glorious 40 miles of cycle lanes and quiet routes. The sheer impossibility of travel without four wheels and an engine, not to mention the danger, is why more and more local households are choosing to acquire 4X4 off-road vehicles, and more and more households are acquiring second, third and even fourth vehicles.

Acknowledging this desperate need, Waltham Forest council is about to embark on a major new programme of parking bays, on pavements and alongside cycle lanes.

In Outer London, the car is the dominant mode of transport for trips originating there, accounting for 52 per cent of all trips by residents.

Due to the dispersed nature of trips in Outer London, the role of the car is acknowledged as sometimes necessary, particularly for medium to longer distance trips.

Exactly. You have to drive the kids to school, then drive to work, then pop into Tesco on the way home for a ready meal. Life would be impossible without a car, and heaven knows how people managed it before the 1960s when, can you believe it, most British households didn’t own a car.

So thanks, Boris, for reminding everyone that the reality of life out here in Outer London is that the car is king and cycling and walking are crap. And if you want to cycle from Walthamstow to Hackney you have a choice of this or this: 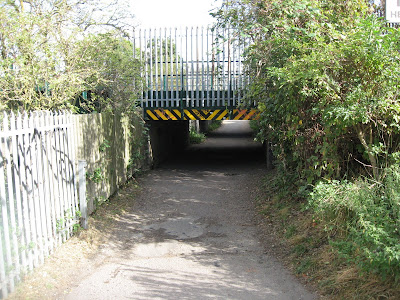 (Above) The Coppermill Lane cycle route. A crumbling surface which frequently floods, and to get under the railway bridge on a bike you have to bend over your handlebars and press your nose to your front tyre. A cyclist was raped here a few years ago. As Boris's own transport document released on 12 October acknowledged, “Fears about personal safety are a significant barrier to starting or continuing cycling.”

And if you want to walk from Walthamstow to Tottenham you have to negotiate crap like this.
Posted by freewheeler at 13:14