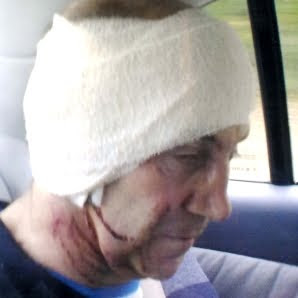 Cyclist Alan Folly has made an appeal for the man who left him needing 32 stitches in his ear to come forward. Mr Folly, from Tilehurst, was peddling past a parked car in Castle Street, in Reading town centre, when the passenger door opened, flooring him.

The dustman said: “I was outside Sweeney & Todd pie shop and there was a double parked car and the man opened the passenger door and hit me.

“The next minute I was on the floor.”

The London Borough of Waltham Forest is about to embark on a massive new programme of on-street parking bays installed alongside cycle lanes, hugely increasing a cyclist's exposure to risk, both from 'dooring' and overtaking vehicles.
Posted by freewheeler at 09:38