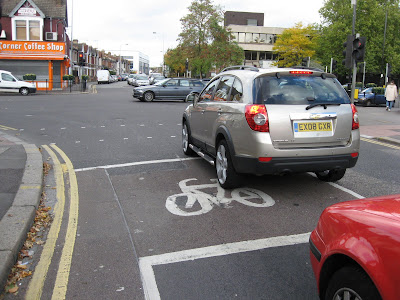 EX08 GXR The kind of slob driver that London is full of. Goes into the Advanced Stop Line at red, is very poorly positioned, and by the time I’ve got my camera out is pushing forward into the pedestrian crossing area. The kind of yob who should be taken off the roads and re-educated, but who understands that the transport universe rotates around them, not around cyclists or pedestrians. 25 October, Wood Street E17, junction with the A503.

About 75 minutes earlier, on Selborne Road, I am approaching the red light by the bus station when another yob overtakes me and occupies the ASL. White male driver of AK52 XDN. Very similar behaviour, revving the engine, roars off at green and then (naturally) blocks the cycle lane. The problem is London-wide, of course. There’s analysis here of ASL abuse in Westminster

Because it is a prejudiced and largely unaccountable institution which panders to the criminal motorist, the Metropolitan Police refuses to enforce ASLs. Meanwhile the proposal to transfer enforcement to local authorities seems to have vanished into the mist. If the Brown government doesn’t introduce legislation before it is booted out of office next year, it is highly unlikely to feature as a priority for an incoming bad-driver-friendly Cameron administration.
Posted by freewheeler at 09:16