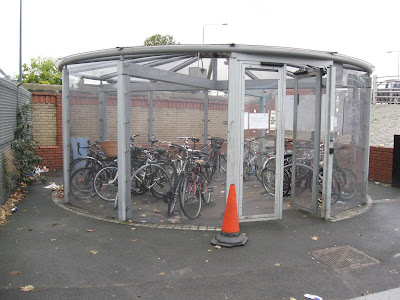 The Bike Shed in Leyton is next to Leyton tube station on the Central Line. It opened in 2006.

The Bike Shed in Leyton can only be accessed using a smartcard. Bikes can then be locked to one of the Sheffield stands inside. Use of this bike shed is free although a £5 deposit is required for a smartcard. These can be obtained from Leyton Library.

The London Borough of Waltham Forest is strangely coy about saying what the parking capacity of this facility is, and you’ll search the internet in vain for a hard figure. Let this blog fill in that void. The Leyton Bike Shed contains 16 Sheffield stands.

Cycle parking provision at London stations does not impress David Hembrow, who notes that

London has 2800 cycle parking spaces shared between 50 railway stations. It also has a population of around eight million people.

Assen where we live in the Netherlands is a small city with just 65000 inhabitants, but our railway station has 2300 spaces. That's one cycle parking place at the station per 28 Assen residents vs. one space per 2800 Londoners. That's a full two orders of magnitude difference (i.e. 100x).

I have previously discussed the Leytonstone Bike Shed, which has parking for 48 bikes. On a sunny weekday at eleven in the morning it recently contained a grand total of seven bicycles. Yesterday, dull and rainy, at 11.35 am, it contained just five bicycles.

The Leytonstone Bike Shed is a dismal failure, possibly because of a history of bike theft, possibly because it is perceived as being too far from the station and the shops, or possibly because it is in a location which some cyclists might find personally threatening. In stark contrast, the Leyton Bike Shed is a rip-roaring success. It is right next door to the station and it is in a relatively open position, with a busy taxi firm nearby. As I’ve noted before, the cycle parking on offer is inadequate to the demand. Yesterday the shed was crammed full of bikes, even though there's currently a security problem and cyclists are advised not to use it.

I was surprised to find the door to this shed wide open yesterday, with a notice from the London Borough of Waltham Forest attached saying There is currently a fault with the automatic door of the bike shed. Please do not attempt to use the bike shed at this time. An engineer has been called to rectify the problem as soon as possible.

The notice is dated 8 October 2009 and yesterday was 3 November. That’s 26 days and the engineer still hasn’t got here yet. As it takes at most only 23 hours from the Leyton Bike Shed to Beijing Capital International Airport or, going in the other direction, LAX, I think we can safely conclude that our engineer is not based on planet earth.

I think the only person who can help us here is the councillor who is paid thirty grand plus to sort out this stuff, and let’s face it, when it comes to extra-terrestial issues, he’s an expert!

Incidentally, the Copenhagen blogger recently wrote about advanced garbage facilities for cyclists. I’m afraid that doesn’t impress us here in Waltham Forest, where as these photographs taken in the area around The Leyton Bike Shed yesterday illustrate, the interfacing of cycling and rubbish is an old and proud local tradition. 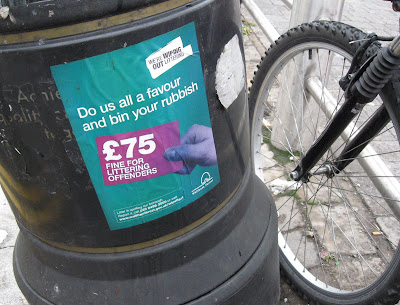 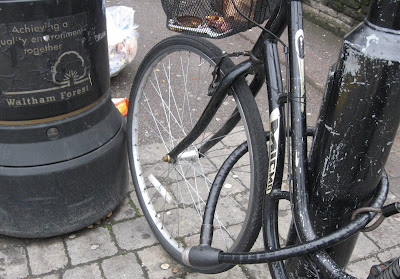 (Above) '"Achieving a quality environment together"

(Below) No room at The Shed 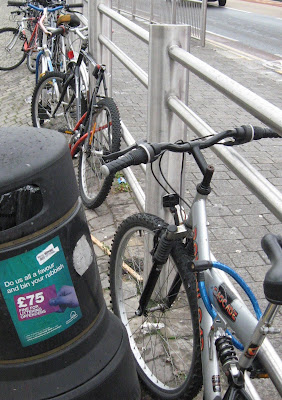 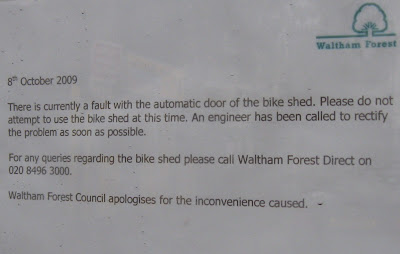 Posted by freewheeler at 07:56