Forest Road, otherwise known as the A 503, is a major highway that cuts right across the London Borough of Waltham Forest, leading from the A 104/North Circular/M11 in the east, to Tottenham in the west. It has high traffic volumes, including commercial vehicles and Heavy Goods Vehicles.

Waltham Forest Council’s proposed new Corridor Scheme covers the eastern end of Forest Road, between the junctions with Hale End Road E17 and the A 104. Here there is a 30 mph limit but it is flouted by the majority of drivers. The basic logic of the scheme is that since traffic speeds are too high, they can be reduced by narrowing the road, by introducing a central reservation between the A 104 and Beacontree Avenue, and, along the rest of the road covered by this scheme, by removing the white line down the middle “as research shows this is a proven method of reducing vehicle speeds”.

It all sounds so reasonable, doesn’t it? And it’s true – Forest Road is very wide along this stretch, and vehicle speeds are too high. Let’s deal with the speeding issue later. Firstly, let’s address the width of Forest Road. At present there are cycle lanes on both sides (so when Councillor Bob Belam justifies the scheme by talking about “adding cycle lanes on both sides of the road” he once again demonstrates that he inhabits a strange parallel universe which bears no resemblance to the one that we residents live in). Because of the width, drivers keep well clear of the cycle lane (below). Most drivers are probably doing 35-40 mph rather than 30 mph, but on this section it does not feel like a threatening road to cycle along. 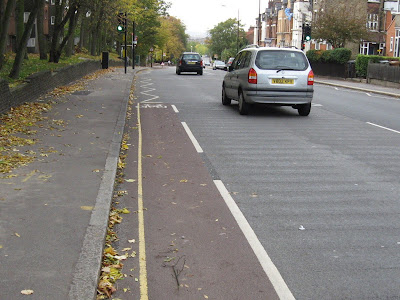 The wonderful thing about the entire length of road covered by this scheme is that currently there is no parking on either side. It is perfect material for a genuine Cycle Superhighway. Better than that, it provides a suitable site for segregated cycle lanes on the Dutch model. You can start the process of building a safe and convenient cycling infrastructure at this very location – right here, right now.

But that’s not going to happen. Transport for London is a partner in this scheme and is colluding with Waltham Forest Council to sabotage any future prospect of a Cycle Superhighway, let alone something on the Dutch/Copenhagen model. This scheme proposes to re-allocate pavement space and carriageway space including cycle lanes for car parking bays. Where parking bays are created, cyclists will be forced to cycle a narrow corridor between parked vehicles and overtaking traffic which comes much closer than at present.

Compare this photograph, looking east from Beacontree Avenue, with the plan (which covers just one small part of the overall scheme): 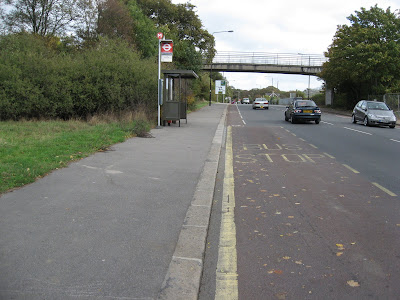 The photograph is taken from the green shaded area, at a point at the top far left of the plan, looking right towards the bus stop and the bridge. This green area, which is basically where the existing cycle lane is, marks the proposed pavement extension. The right-leaning blue slashes represent the proposed new parking bays on the pavement, some of which can be seen to extend into the white area of existing footway. Parked vehicles will surround the bus stop. The turquoise-coloured area marks the proposed new central reservation, which will force vehicles closer to the cycle lane, which is itself re-located from the existing kerb closer to the centre of the carriageway, around the new parking bays.

Having compared the photograph and the plan, now read how the Council justifies this scheme:

Introduction of footway parking bays along Forest Road: This will take parking off the road and improve traffic flow for drivers and cyclists. Furthermore, it will provide additional parking places for residents. It should be noted that there will be no loss of footway space as a result of these proposals.

In the first place, since parking currently doesn’t exist on either side of the road it is extraordinarily dishonest to say this scheme will remove parked vehicles from the highway.

Thirdly, providing “additional parking places for residents” simply promotes car ownership and dependency, and once again shows how bogus the Council’s Green rhetoric is. In Outer London, the car is the dominant mode of transport for trips originating there, accounting for 52 per cent of all trips by residents. Schemes like this one simply reinforce the attraction of car ownership and use.

Fourthly, it is astonishingly impudent to claim that this scheme will “improve traffic flow for cyclists”. On the contrary, it will radically worsen conditions for cycling, by forcing cyclists to cycle beside rows of parked vehicles, with all the attendant dangers of ‘dooring’, while at the same time narrowing the road will bring overtaking traffic much closer. There will be ‘a buffer zone’ between the pavement-parked vehicles, but as it will only be about half the width of a car door it won’t prevent anyone getting knocked off their bike. And, though the scheme acknowledges the unusual width of this road, the re-located cycle lanes will be a miserly 1.5 metres wide.

Finally, to claim that there will be no loss of footway space is specious, since the new footway space will be devoted to car parking, and some of these bays quite clearly impinge on existing pavement space, narrowing it.

And the end result of a scheme like this? It will resemble this older scheme, on High Road Leytonstone. A barren, brutalised street, deeply unpleasant both to walk on or to cycle along. (And if getting rid of the central white line magically reduces traffic speed, why hasn't it been done here? Lawless speed is certainly an issue on this stretch of road.) 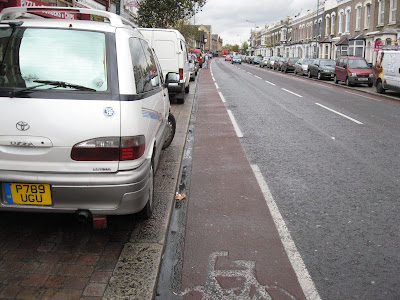 The Forest Road Corridor Scheme includes the re-allocation of this cycle lane (below) for car parking. This is just one of many examples I could give. Cyclists will be forced out around the parked cars in a much-narrowed downhill road with no central white line. This strikes me as the perfect recipe for future collisions. 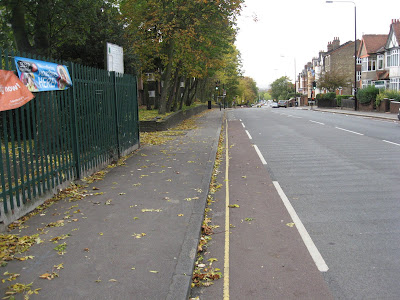 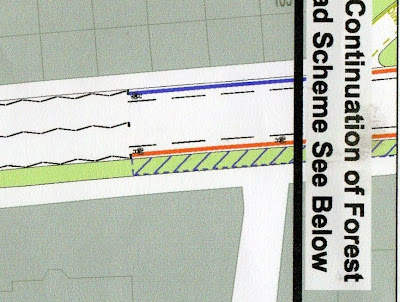 The above photograph is taken from the point where the final letter 'n' in Continuation is on the plan, looking to the left. The green coloured strip marks where the existing cycle lane is, expanded to provide enough width for car parking.

These proposed new parking bays are right outside a school, which is behind the green railings seen on the left of the above photograph. So much for 'walk to school'. The long line of new car parking bays will comprehensively obstruct the possibility of any future cycle lane through that inviting gap to Hylands Road E17 and the quiet backstreets (below). 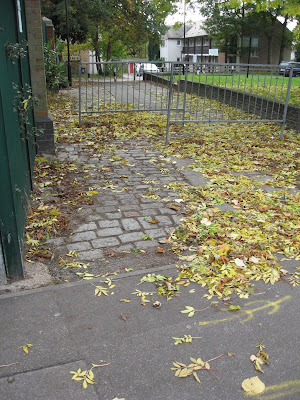 At the end of the day, having significantly degraded conditions for walking and cycling, will this scheme reduce traffic speeds? I have my doubts. Narrowing the road and introducing a central reservation didn’t work further along Forest Road, where finally a speed camera had to be introduced outside the court earlier this year.

Traffic heading west is going downhill and I see no reason to assume that narrowing the road guarantees adherence to a 30 mph limit. Removing both the pedestrian refuges and the central white line may simply result in reckless overtaking.

But even if this scheme is successful in reducing vehicle speeds to 30 mph, cycling will still be transformed into a deeply unpleasant experience involving using a 1.5 metre cycle lane sandwiched between bays of parked cars and high volumes of traffic including heavy goods vehicles overtaking very close to the cyclist. And if you are 'doored' when a lorry is passing by, the fact that its speed is only 30 mph is going to make very little difference to the outcome.

Transport for London analysis suggests that around two-thirds of the potential for increased levels of cycling in the Capital is in Outer London, i.e. in boroughs like Waltham Forest. But that potential is never going to be unlocked as long as transport culture in the capital remains firmly committed to the primacy of motor vehicle flow and car parking. That in the year 2009, cycle lanes and pavements are proposed as suitable for conversion into car parking bays demonstrates just how extraordinarily backward and reactionary our transport culture remains, despite torrents of Greenspeak.

It is widely acknowledged that concerns about safety represent a significant barrier to increased cycling in London. And yet this (below – Lea Bridge Road) is the future of cycling in the London Borough of Waltham Forest. Cycling beside long rows of parked vehicles while being overtaken at close quarters by high volume traffic containing many large vehicles. It’s not surprising that very few journeys in Waltham Forest are made by bicycle, when conditions are like this and are getting not better but worse.

And by the way, do admire the 'buffer zone' shown to the left of the faded pink cycle lane in the photo below. So effective, don't you think? 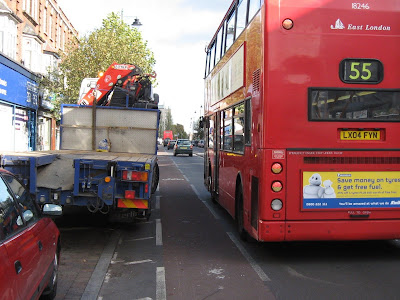 Posted by freewheeler at 11:51