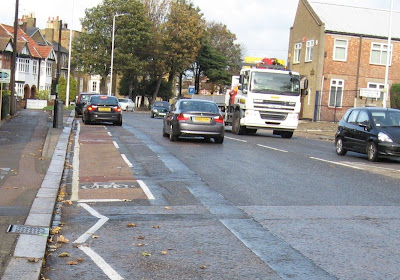 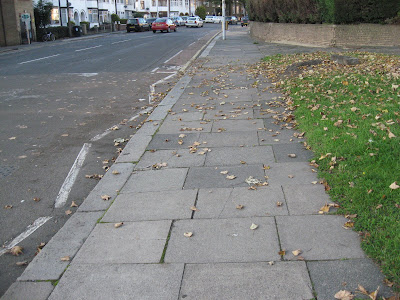 These photographs were taken on Wood Street, Walthamstow(also known as the B 160), close to its southern junction with Lea Bridge Road (the A 104). They are on opposite sides, at the same location. What they have in common is that they are both going to be "improved" under one of five area schemes scheduled for the current financial year. Yesterday I wrote about the Forest Road scheme, today it's the turn of The Wood Street Corridor Scheme.

In a nutshell, the cycle lane in the first photograph is going to be converted into an off-road parking bay (off-road in the sense of being on an extended area of pavement). Cyclists will be forced out round the parked vehicles, closer to the centre of the carriageway. The cycle lane will be 1.5 metres wide.

The pavement on the other side of the road shown in the second phtograph is going to have lines painted on it, converting most of it for parking. Pedestrians will be left with a narrow strip, which from the plan looks as if it will be about as wide as a flagstone. See the plan below (the marked parking bay on the white section at the top shows the pavement in the second photograph, the green section at the bottom, which indicates the pavement build-out with new parking bays, shows the length of street in the first photograph).

Not only will this degrade the walking environment in the most spectacular fashion but it will add to the subjective and objective danger of cyclists using the cycle lane, because now instead of cycling alongside a kerb, they'll be cycling alongside parked vehicles. 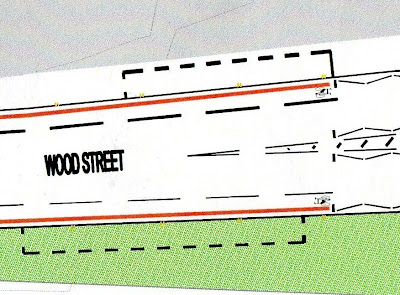 This example cited here is just one small part of an extensive scheme, which involves doing the same thing all along Wood Street, more or less as far as the railway station. The Council's rationale for stealing whole sections of pavement and converting them into parking bays, and for building parking bays on cycle lanes and re-routing the cycle lanes so that cycling involves travelling along a narrow corridor between parked vehicles and moving vehicles, is that "Footway parking bays are being proposed to improve facilities for residents, business and shoppers while maintaining traffic flow in Wood Street."

Residents is used here as being synonymous with residents who travel by car, not residents who walk or cycle. In short, all this scheme will do is promote car dependency and car use for short journeys, while simultaneously deterring walking and cycling.

These five area schemes show that car dependency and on-street car parking are being promoted and ruthlessly expanded to a quite astonishing degree - and by a Council which never stops boasting of its Green credentials. This would be bad enough in itself, but the price for all this is to be paid for by pedestrians and cyclists, who will experience a worse and more unpleasant environment.

(Below) As this scene further along Wood Street shows, the Council is passionate about looking after the interests of cyclists and pedestrians and creating a safe and uncluttered street environment. 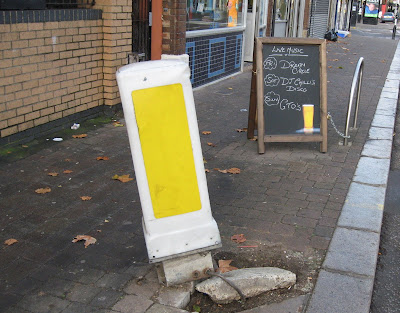 Posted by freewheeler at 15:25