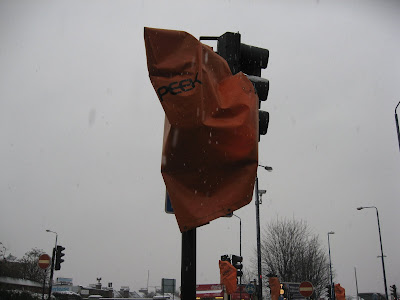 Back in September all the lights for cyclists at the dedicated cycle crossing from St Mary Road E17 to Selborne Road were covered up with hoods during road works. Cyclists were left to guess when was the best time to cross a total of five lanes of oncoming traffic. Pedestrians were also left without lights. The only temporary lights supplied were for drivers.

Since then the hoods have remained on the lights, long after the road works have apparently finished and everything else has gone back to normal. In December the hood was removed from one of the four lights. It’s now been replaced. Because of the hooding you can't see if the tiny green light for cyclists has been switched off or is working and is merely obscured.

It means for most of a five month period cyclists have been denied safe access to what is supposed to be a dedicated signalled cycle crossing. That denial continues to this day. The indifference and contempt displayed for cycling could hardly be more explicit.

Not surprisingly there has been a collision between a cyclist and a pedestrian at this location. In November

A CAMPAIGNING cyclist says there is no major problem at a junction where a grandmother was injured by a hit and run rider.

Gerhard Weiss, of the Waltham Forest Cycling Campaign, said: “I have also used the junction to see for myself and must say that with the lights working I had no problem, but I know other people found it poorly designed.

Note that the cycling lights in the press photograph are HOODED.

Frankly I’m a bit surprised that a leading figure in Waltham Forest Cycling Campaign has apparently never used this facility before, and had to make a special effort to check it out. I’m even more surprised that the local cycling group has been completely silent about the hooding of the lights, which puts cycling safety at risk and increases the chances of a collision.

If he goes back and takes a second look Gerhard might also like to reflect on the absurdity of a major cycling route having a short one way section on St Mary Road with NO ENTRY for cyclists (see the second photograph here). The solution is perfectly simple: get rid of the car parking here and introduce a segregated contraflow cycle lane. There is not a bat in hell’s chance of this happening, however, because Waltham Forest’s transport planners and councillors are comprehensively committed to maintaining and expanding on-street car parking wherever possible, irrespective of the interests of cyclists and pedestrians.

Even Labour’s prospective parliamentary candidate for Walthamstow flouts this restriction, and I don’t really blame her. 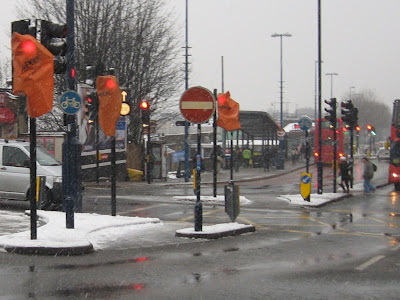 Posted by freewheeler at 09:55