How to block a cycle lane 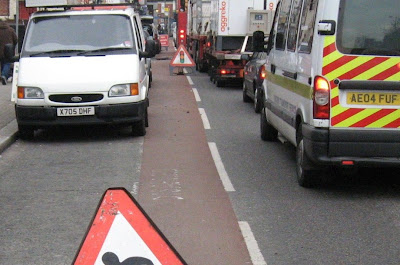 Just add four roadworks signs (one of them fallen flat) and hey presto! - the cycle lane is blocked. Which adds to the fun of undertaking heavy goods vehicles and buses. Good job one of those vehicles is an ambulance, it might be needed...

Yes, it's High Road Leytonstone again, defined a year ago as "cycle friendly" by that slippery organisation Sustrans. At present there are roadworks in the other lane, with temporary traffic lights. Instead of blocking off the parking bays and using them for signing, the signs were plonked obstructively in the cycle lane.

(Below) There's no real reason why a cyclist should be expected to wait at red as the cycle lane acts as a temporary contraflow lane. But consideration of cyclists simply doesn't enter into the philosophy of roadworks in a primitive and backward transport society like Britain. 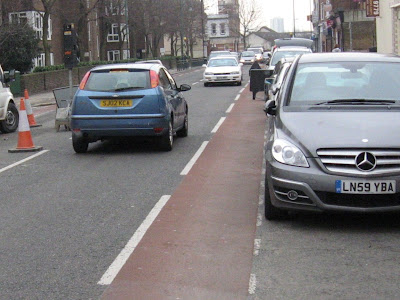 British on-road cycling infrastructure - integration - isn't working. The only way you are going to get lots of people cycling up and down High Road Leytonstone is to provide a segregated cycle lane on the Dutch model. There's plenty of space to do it on this street, although of course it means clearing away those parking bays. At present there is no vision of this kind of cycling future on the part of either the London Cycling Campaign or the Cyclists' Touring Club, both of which remain doggedly committed to on-road cycling. And if cyclists aren't going to demand it, there's little chance of politicians implementing it.

Compare the scene above with that below. Notice that none of the cyclists is wearing helmets or feels obliged to dress up in luminous yellow jackets. In Amsterdam two unaccompanied small girls cycling side by side is a natural activity. You'd simply never see that anywhere in Leytonstone. Quite understandably, no parent would want their child to cycle on a road like High Road Leytonstone. 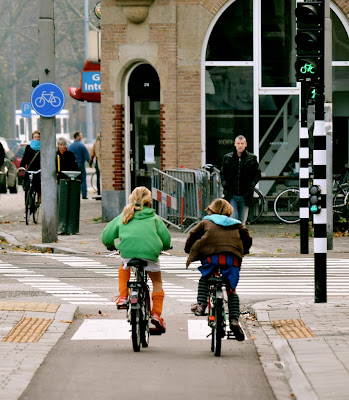 Posted by freewheeler at 10:54