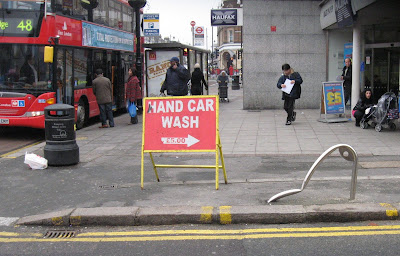 This blog started life at this very site in August 2007. See the photo here.

The cycle stand is wrecked and the local car wash outfit now has two signs on the footway instead of one (see photo below). You can still use this stand but you risk losing your bike, as one snip of a boltcutter is probably all it takes to cut through the stand at the point where it's bent.

Laws to protect cyclists and pedestrians are enforced by no one, whether it’s the police or the council.

Just for the record

(a) The Council has the power "to require the removal of anything deposited on a highway so as to constitute a nuisance" (Highways Act, 1980, Section 149).

(b) The Council has the power "to require that free passage along the highway is not wilfully obstructed in any way (Highways Act, 1980, Section 137).

(c) The Council has a duty "to assert and protect the rights of the public to the use and enjoyment of the highway (Highways Act, 1980, Section 130).

Placing large advertising boards on the public footway is against the law and could cause problems for parents with buggies, elderly people and those with disabilities” said Peter Turvey, Head of Street Environment.

But that's a different local authority. In Waltham Forest the Council turns a blind eye to the widespread abuse of public space by local businesses. No councillor ever seems to walk or cycle anywhere, or take the slightest interest in the widespread degradation of the walking and cycling environment.

This damaged cycle stand was probably hit by a lorry whose driver then drove off (council tax payers are left to pick up the bill for widespread damage of this sort caused by the lawless and barely-regulated road haulage industry). You can be certain that this stand will not be replaced in 2010. Or 2011, come to that. Or ever. 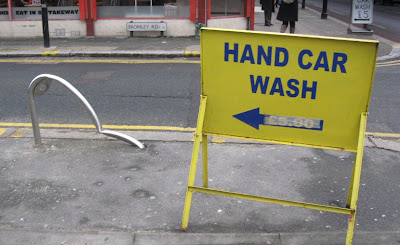 Posted by freewheeler at 09:45