Cyclists on the pavement at 35 Harold Road E11 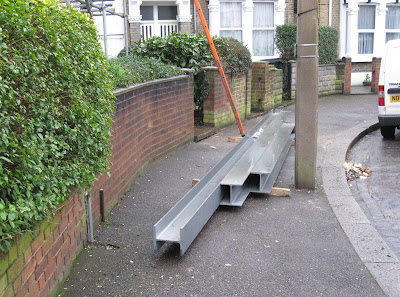 These cyclists on the pavement, they're a menace. They make people fall over, they kill them, it's a fact.

Sorry, did I say cyclists? I meant builders. They drive on pavements with their lorries, they block them with building materials, they're completely out of control. I think every builder should be made to wear a number plate.

Builders break the law and block pavements with impunity. Like these cowboys working at 35 Harold Road E11 today. They've dumped huge metal girders on the pavement, making it impossible for anyone with a wheelchair, pram or buggy to get by. A blind person or someone visually impaired could easily trip over and smash their skull.

And if a police officer or a PCSO walked by, what would they do? Nothing whatsoever. This sort of lawlessness and anti-social behaviour isn't on their spectrum.

If you ring the Council they'll send someone to have a look. In a week's time. By which time the obstruction will usually have gone.

Not that the Council exactly goes out of its way to publicise all those laws designed to maintain free access for pedestrians on pavements, or advertise a number to ring when residents see the law being broken. In fact the only time I saw a feature on problems faced by pedestrians in the Council's fortnightly propaganda rag it was about, you guessed, cyclists on the pavement.
Posted by freewheeler at 14:21