"An extra 500 tonnes of grit" – but none for cycle routes 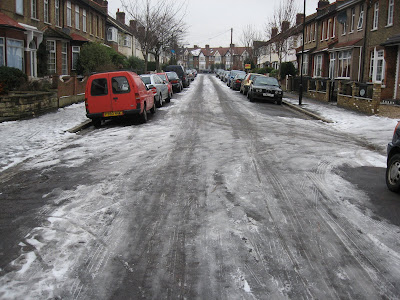 After six days of abstention from cycling I finally felt it was safe to venture out yesterday. The snow and ice had mostly melted from the side roads and the main roads. My friend in the City who commutes on her bike to Waltham Forest felt exactly the same. All over the country during the past week cyclists have stopped cycling.

There were a few glitches. Like the burst water main on Hoe Street, which still hadn't received any attention from Thames Water hours after I first spotted it. And there was ice all over the cycle lane close to the junction with Clarendon Road E17. And I'd almost forgotten what it was like to be cut up by a zombie bus driver. But these trifles aside everything was fine until I reached College Road (shown above and below).

College Road E17 is a signed cycle route, with a dedicated signalled cycle crossing of Lea Bridge Road (A104). And this road was where I had to stop and walk. The whole road was still a sheet of ice, mainly because it's a cul-de-sac with little vehicle activity. Now a council which was at all serious about cycling would ensure that its primary cycle routes were gritted. But of course Waltham Forest is not remotely cycling-friendly.

The latest issue of the Council's lavishly subsidised propganda sheet Waltham Forest News boasts that "an extra 500 tonnes of grit" were in place before last week's snow. An extra 500 tonnes on top of the already existing mountain!

Not a shovelful of that cornucopia of grit went on cycle routes or off-road cycle lanes. Not an ounce. Not a teaspoonful. Because cycling just isn't regarded as important in the London Borough of Waltham Forest. 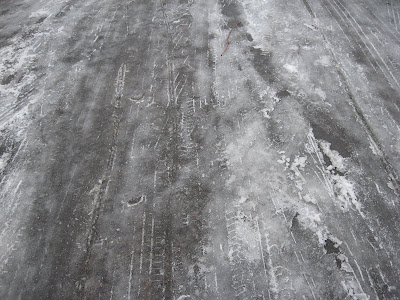 Posted by freewheeler at 08:20