The recommended cycling route where cycling is banned 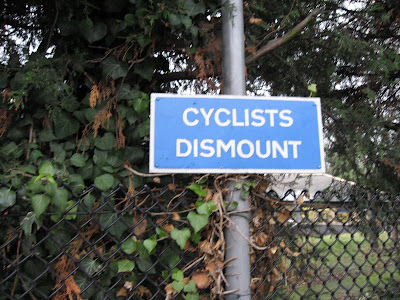 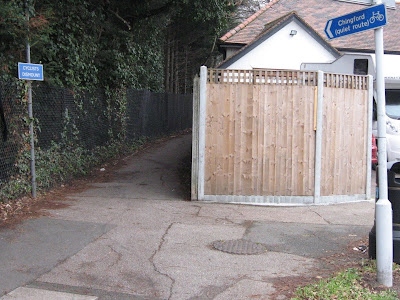 The signed ‘quiet route to Chingford’ for cyclists. You can find it on Transport for London’s LOCAL CYCLING GUIDE 4. It runs between Walthamstow from the Crooked Billet, where the North Circular meets the A112, to Chingford, where it emerges on to The Ridgeway (B169) and King’s Road (A110). From the Chingford end it is, of course, the ‘quiet route to Walthamstow’.

Between Grove Road E4 and Heathcote Grove there’s a two-hundred metre path through Chingford Mount Cemetery. It forms part of the designated route but cycling is banned. Which does rather defeat the point of a cycle route, does it not?

The reason for the ban is that the cycle route incorporates a tarmac public footpath fenced in by iron railings which crosses the cemetery. The path is too narrow for ‘shared use’ with walkers.

I’ve never met a singe cyclist while using this 'quiet route', and no cycle counts are ever taken here. But then nobody involved in promoting cycling in London seems interested in acknowledging or measuring failure. It’s enough to celebrate ‘20 miles of quiet routes in Waltham Forest’ without bothering to examine why those prize-winning ‘quiet routes’ may be suppressing cycling rather than encouraging it.

It would be possible to put in a dedicated cycle lane on the Dutch model at this point, but naturally there is no political will on anyone’s part, least of all cycling campaigners. As far as British cycle campaigning goes, marketing campaigns, minimal-cost cycle facilities and statistics which portray cycling as safe and getting better all the time are always preferable to infrastructure which has been shown to succeed.
Posted by freewheeler at 10:17