The photo that sums up London’s transport sickness 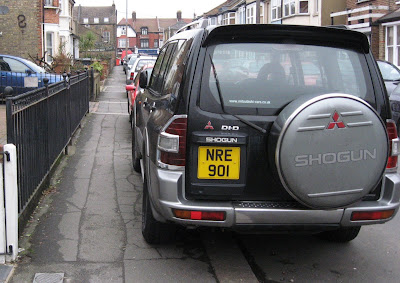 London is a sick, backward, car-polluted city which massively discriminates against cyclists, pedestrians and non-car owning households. And this scene on Stanley Road, Chingford, perfectly sums up this sickness, which no one in the three main parties has any interest in curing. In Waltham Forest, 38 per cent of households don’t own a vehicle, and they have to endure even the theft of their pavements to car owners.

The historic irony is that in 1985 legislation came into effect in Greater London which was supposed to eliminate pavement parking across the capital. That legislation was the result of intense lobbying by the Pedestrians Association, Friends of the Earth and other environmental organisations, disability groups and women’s groups. It was transport policy from below – democratic resistance to the powerful road and motor lobby. But all the major institutions in British transport culture were ranged against that progressive legislation, from the Department for Transport – which to this day very successfully resists a national pavement parking ban – to local authority highway engineers, a profession then as now dominated by able-bodied car dependent men on car user allowances.

The 1985 legislation contained two glaring loopholes. It allowed councils to exempt streets from the ban and it provided no statutory protection for pedestrians on exempted streets. The Kafkaesque consequence is that a law intended to liberate pavements from parked cars has been used for 25 years to create pavement parking. Highway engineers continue to exploit it to promote car dependency. Naturally no journalist or politician has ever noticed this anomaly.

Stanley Road has been turned over to unrestricted free car parking which obstructs the pavement on both sides. It’s a sick street where walking and cycling are unpleasant, and the body responsible for this situation is the Council, which has the chutzpah to blather about getting tough with those responsible for blighting the streets we live in.

Waltham Forest Council has the hypocrisy to assert that

People may think it is only a sweet wrapper or cigarette end, but littering creates the problem of dirty streets and it is illegal. If you are seen littering you will be fined £75.

However if you dump a ton of metal on the pavement and leave it there to block the pavement, the Council will be on your side.

But there is no greater local environmental criminal than Waltham Forest Council. It’s a council which has actively encouraged a massive local increase in car ownership and dependency and which plays an active role in fouling London’s atmosphere:

London has already breached new EU pollution limits for the entire year — weeks after they were introduced. Monitoring stations across the capital show that four areas have exceeded the number of times that levels of nitrogen dioxide are allowed to rise above safe levels. Found primarily in exhaust fumes, NO2 can harm lung function and cause respiratory problems, especially among children and the elderly.

Simon Birkett, of the Campaign for Clean Air in London, said today: “This shows a systematic failure of government to comply with pollution targets. This affects every Londoner, and just weeks into the year we have already exceeded the yearly targets, which is a disgrace. 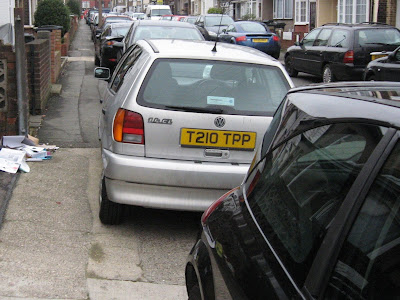 Apart from air pollution, there is also a connection between degraded streets like this one and obesity, crime, mental illness and depression. Who could possibly call Stanley Road a neighbourhood? It’s a sewer for cars. A squalid landscape occupied by addicts - fossil-fuel addicts. Ironically just a couple of hours after I took these snaps there was a stabbing just around the corner.

On the next street, Garfield Road E4, the situation is no better. Motorised insanity hardly becomes more extreme than allowing drivers to park on the pavement right next to a car park. But this is the true face of the local Labour Party and the Liberal Democrats, who blather endlessly about how Green they are, while actively defending and enlarging street degradation like this. 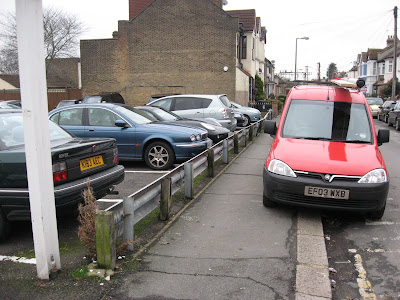 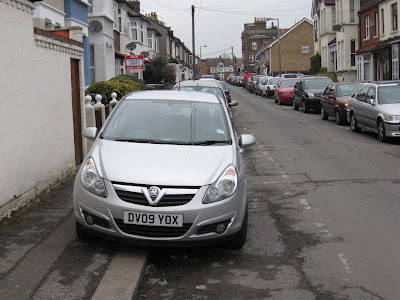 Posted by freewheeler at 11:00