How an integrationist became a segregationist 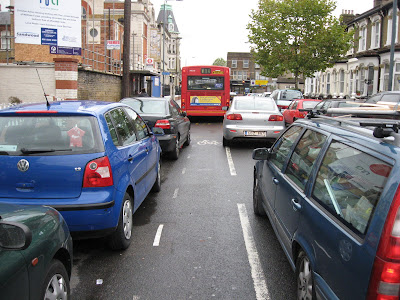 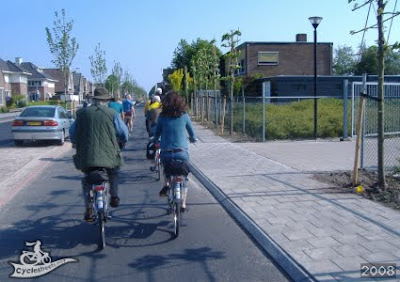 When I started this blog I was an integrationist. I was against the idea that cyclists need infrastructure separate from drivers. But not any more. Basically I'd rather cycle in conditions of the sort found in Assen (second pic) than Leyton (first pic). [Assen pic by David Hembrow] I imagine any sane person would, too. And if you really want to get masses of Londoners cycling, you aren't going to succeed if they have to face the kinds of traffic to be experienced in Leyton or anywhere else in the capital.

A central argument against segregation is that it reinforces the idea that cyclists aren’t traffic and don’t belong on the road. Removing cyclists from the roads is exactly what the road lobby wants. The most prominent American advocate of so-called ‘vehicular cycling’ is John Forester. For an English variation there’s this, from Bill Chidley:

I fear that the push for cycle lanes will result in cyclists being pushed off the road altogether. Those of you who might dismiss such a view as paranoia brought on by galloping monoxide poisoning would do well to remember the words of Edmund King, of the Automobile Association: "I think separating out cyclists [from other traffic] can only be good for everyone." In other words, get off the road - you know it makes sense. If one of the main obstacles to getting more bums on bikes is lack of confidence, then surely it would be better to spend the money on training so that potential cyclists will know how to handle their bikes and to recognise and negotiate hazards. This will instil confidence. And a confident cyclist is a safe cyclist.

This is also the philosophy of the Cyclists’ Touring Club. We have a national cycle network that connects everywhere to everywhere else - the routes are called "roads". Cycling is not in decline but growing, and the more people who can be persuaded to cycle the safer and more attractive cycling will become. The London Cycling Campaign has a similar philosophy, though it is not in principle opposed to segregation, and it is in favour of ‘cycling friendly streets’, which seems to mean on-road cycle lanes and Advanced Stop Lines.

Put like that, who would want to defend segregation? It is perfectly true that British-style segregation is crap. British cycling infrastructure in almost every aspect is subordinated to the primacy of motor vehicles, both driven and parked. British highway engineers like nothing more than splashing some paint on a pavement, sticking up a sign with a bike next to a pedestrian, and calling it ‘shared use’. Even when a separate off-road cycle path is built it is often a hideous parody of what you’d find on the continent.

The most recent high profile cycle route was provided on the new Orient Way which links West Leyton with Stratford along the Lea Valley. This has very wide and smooth segregated cycletracks and it won the LCC Best Cycle Route Award in 2001.

Yet “the best single cycle facility in the borough” is unpopular with cyclists. The Council’s own figures show that in the eight years between 1998 and 2007 cycling numbers actually decreased at the Crooked Billet underpass.

The following 7am to 7pm cycle counts undertaken along the North Circular Road screenline.

While cycling on selected main roads in Waltham Forest has generally risen, cycling numbers fell at the Crooked Billet underpass over a nine year period. This underpass system is actually suppressing cycling. Curiously the figures for 1985-1996 have been removed from the record of cycle counts given on p. 21 of the Council’s Waltham Forest Cycle Action Plan, which is plainly another attempt to mask failure, rather than acknowledge it and seek a solution.

No counts are taken on the Orient Way cycle path, and I think I can guess why. It’s little-used by cyclists, largely because it is not a strategic route but also because it is broken up by side roads where the cyclist has to give way, has one section which is lonely and out of sight, has signalled junctions where a cyclist has to wait up to three times at red to travel some 50 metres, and it is generally an unpleasant environment, beside fast moving traffic. The fact that crap like this was felt worthy of a prize by the London Cycling Campaign shows how bizarrely remote from any notion of attractive and convenient cycling that organisation is.

But if crap British segregated infrastructure is deterring cycling, so, too, is on-road unsegregated cycling. Consider Hale End Road E17. The cycle counts (for a period of 12 hours) are 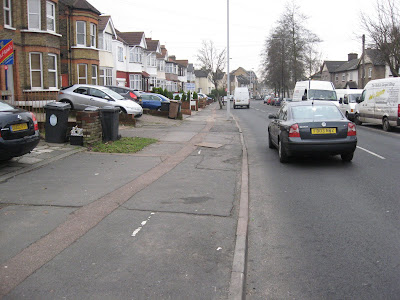 It would be perfectly feasible to build a segregated cycle lane here, but as fading scraps of white paint on the pavement reveal, the footway is one where you are free to park a car, even though every household has off-street parking. Footway parking allows a resident to accumulate a third car in addition to the two in the front garden.

I am now an enthusiastic convert to the possibility of segregated cycling. The reason is quite simple and can be summed up in two words: David Hembrow. Hembrow’s blog lucidly demonstrates how segregated cycling infrastructure on the Dutch model is the secret of mass cycling. And I see that in being impressed by the world of possibility which David Hembrow's blog opens up I am not alone.

The Netherlands is the leading cycling nation in the world and it’s all down to segregated infrastructure. But it's not on the road lobby's terms, rather the reverse. Even within the Netherlands the variations in modal share are rooted in infrastructure. Cycling is suppressed where cyclists have little infrastructure and have to share the road with large volumes of traffic, and cycling’s modal share rockets once you put the bicycle before the car and provide direct, safe, convenient segregated infrastructure. Now, everywhere I cycle, I see the potential which London has, if only cycling campaigners would embrace the Dutch template.

But many won’t. Britain is too hilly! There just isn’t room on London’s narrow streets! Where would all the parked cars go? The excuses pile up, reminding me of the excuses people give as to why they really, really need to travel short distances by car.

And hardcore cyclists think if they can do it, everyone else can. People who are afraid to cycle, quite reasonably in my view, are lectured with road casualty statistics and told how rare it is to be killed or injured. There’s safety in numbers! But as a hardcore cyclist myself I have grown increasingly disenchanted with on-road cycling in London. The sheer volume of traffic, both in motion and parked, makes for very uncomfortable cycling, and the large number of aggressive and reckless drivers take away the joy of cycling. What ought to be an exhilarating way of getting around is all too often stressful, unpleasant or frustratingly inconvenient. The reason why so many cyclists ride on pavements, go through red lights and go down one-way streets the 'wrong' way is that the existing transport infrastructure thwarts them at every turn. Perceived 'bad behaviour' by cyclists is simply a classic Darwinian survival strategy in a hostile environment. Cyclists usually want to get to their destinations on fast, safe routes, and if the transport infrastructure only puts up barriers to that aspiration, they adapt accordingly. I always cycle down Lloyd Baker Street WC1 (see photo below) the 'wrong' way and I see no reason not to.

Parking is certainly an issue in transforming London. Getting rid of car parking was the challenge for both Groningen and Copenhagen. The proliferation of parked cars in London has been achieved at the expense of pedestrians and cyclists. There is no reason why this tide should not be reversed. But it has to begin with cycling campaigners having a vision of what is possible. Here I am not optimistic. Cycling campaigners seem to me to be all too often either defeatist (masked as gritty realism about the limits of the possible) or collaborationist (accepting with gratitude the scraps offered them).

The other day, on London Cyclist, someone commented

Anything that tends to get more people onto cycles more often is likely to be mostly good. Then an increasing number of people will find that, without any particular magic (or clothing), they are “cyclists” too. And then they may think about that when driving or walking around London. And then they may start thinking “hmmm, it would be better if there was better cycling infrastructure in London; perhaps I should contact my council”. And then things might snowball.

They might. But I don’t think for a moment that they will. Not unless cycling campaigners are very clear what they want, and what they are no longer prepared to put up with. Me, I want infrastructure on the Dutch model. I’m sick of all this other crap.

(Below) Space which could be used for a wide, segregated cycle lane is instead devoted to free car parking on the pavement. Chingford Road E17, where drivers speed. 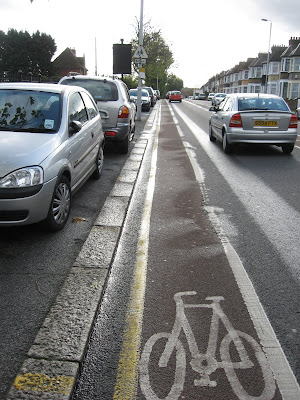 (Below) The perfect site for a wide segregated cycle lane - currently devoted to free parking for 4X4 owners, despite off-street parking nearby. Shernhall Street E17. 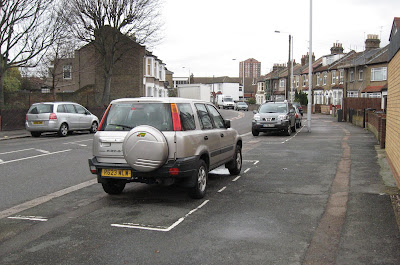 (Below) Lloyd Baker Street WC1. This absurdly wide street is one-way, even though it is on a direct line for cyclists heading into the West End, and wholly given over to car parking, not cycling. 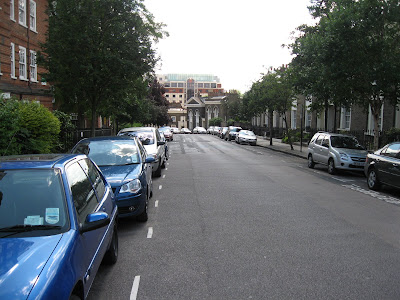 (Below) Farringdon Street EC4. The carriageway is seven lanes wide, two reserved for taxi parking, none devoted exclusively to cycling. 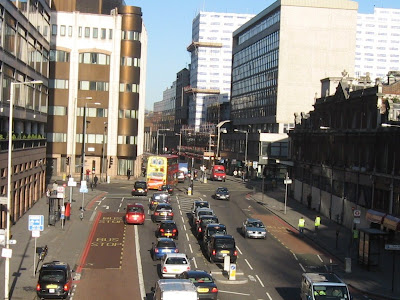 (Below) Bayley Street WC1. Ample room for segregated cyle lanes, if you got rid of those taxi stands. It is surrealistic that a handful of parked vehicles are the priority on this street, not safe segregated cycling. 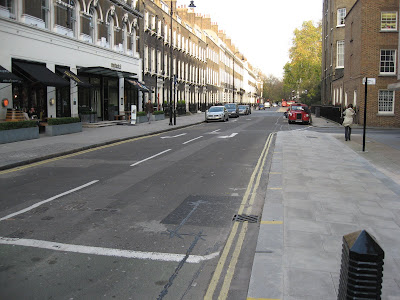 Posted by freewheeler at 11:48