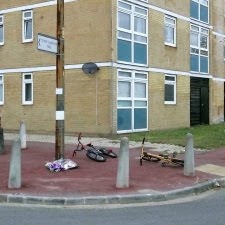 A 13-year-old boy died who after being struck by a car in Dagenham has been named locally as Thomas Stone.

The accident happened in Bell Farm Avenue at around 7.45pm, according to police and the London Ambulance Service (LAS).

Friends told the Post that Thomas, of Gay Gardens, had been riding his bike when the incident happened.

It was apparently a hit and run killing:

The driver of the blue coloured Toyota Celica, a 20-year-old woman, left the scene but later returned. She was arrested on suspicion of causing death by dangerous driving and taken into custody at an East London police station.

A believed passenger in the vehicle, a 36-year-old man, was also arrested on suspicion of causing death by dangerous driving and also taken into custody at an East London police station.

It is a bitter irony that this fatality coincides with the latest smiley-smiley propaganda from Transport for London and the Mayor’s office.

New figures released by Transport for London and City Hall show that last year the capital's roads were the safest since casualty records began in the 1970s with the total number of people killed dipping below 150 for the first time.

To me that statement is a classic instance of what, in another context, has been identified as misleading measures of safety on the road and conniving with careless and dangerous driving, since most of the danger on the road is due to behaviour which is mainstream driving behaviour.

Another impressive student of ‘road safety’ is Olaf Storbeck, who calculates that so far this year eleven cyclists have died on London roads, which means last year’s total of ten dead cyclists has already been exceeded. Mr Storbeck calculates that the number of London cyclists killed since 2000 is 186.

Prophetically, he asked several weeks ago:

Will 2011 become a black year for cyclists in London?

The spin put on the 2010 statistics by Transport for London was designed to obscure an aspect highlighted by the Evening Standard:

The total number of children injured on London's roads has risen since Boris Johnson cut funding for road safety, it emerged today.

A total of 150 more youngsters were injured on the capital's roads last year - a 14 per cent jump.

Lambeth in South London came under fire earlier this year for scrapping 30 lollipop patrol posts in a bid to save £150,000.

Interpreting casualty figures and using them as a measure of ‘road safety’ is a very contentious and often ideologically-driven affair.

Meanwhile let’s have a report on London’s safer-than-ever roads from Dalston Junction:

The current situation at Dalston Junction in London highlights a lamentable state of affairs. It is for me one of the most dangerous locations in London, for anybody - motorist, cyclist, pedestrian - and given recent tragic events I am aghast at the continuing rank indifference of the various agencies responsible for the transport network.

I was there again today and asked a 'banksman' why, as a pavement had been closed, and so many pedestrians were hazardously crossing through and in between heavy traffic, a proper (if only temporary) pedestrian crossing had not been provided. "Too expensive" was his reply. So pedestrians deprived of a footpath are crossing in between heavy traffic through which cyclists are also travelling on a highway narrowed substantially by building works. The tragic irony of this indifference is, this is a transport hub.

(Below) Apparently no one was hurt in this Walthamstow crash not far from a local primary school. So it’s not recorded in the statistics used to define ‘road safety’. This helps to prove that London’s roads are getting safer all the time. 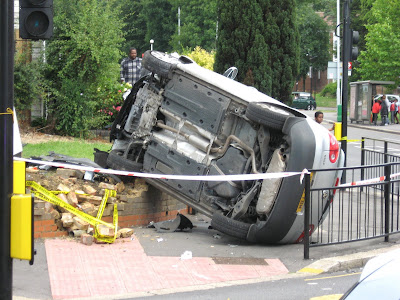 Posted by Freewheeler at 09:41