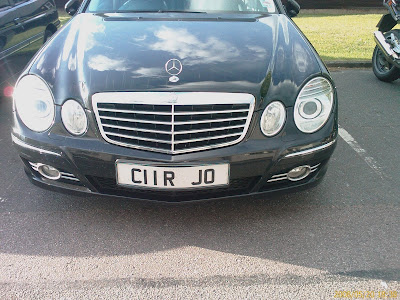 At the last local elections the local Liberal Democrats fell apart, with deselections, claims of an internal coup, and disaffected Liberal Democrat councillors standing as independents. The result was lots of Lib Dems losing their seats on Waltham Forest council. At the heart of these murky and rancorous events was Councillor Johar Khan, whose favoured mode of travel is a Mercedes Benz with a personalised number plate testifying to his status as a councillor. After he lost his seat the number plate became somewhat redundant.

But perhaps the days of numberplate shame will soon be at an end. Johar Khan has experienced a moving conversion, putting his passion for justice above such trifles as party allegiance.

“I am proud to join the Labour Party which is the only party that stands for social justice in Britain and will continue to work for our community in Waltham Forest.”

Photo credit: Truth Will Out
Posted by freewheeler at 12:33