Cyclist knocked down on Waltham Forest’s most dangerous road

A spokeswoman for the London Ambulance Service said: "We were called at 4.52pm to reports of a road traffic collision on Lea Bridge Road. We sent an ambulance crew to the scene. Our staff treated one patient and took them to Whipps Cross Hospital."

A council report made public earlier this year said the section of Lea Bridge Road where the crash happened was the most dangerous in the borough. In a 36-month period up to March 2009 there were 80 injuries resulting from incidents on the street between the junctions with Wood Street and Manor Road.

It’s a bit of a mystery why any cyclist should experience problems on the eastbound Lea Bridge Road with its cycling-friendly infrastructure (below) which gets the thumbs up from the local branch of the London Cycling Campaign (see page 5 here). 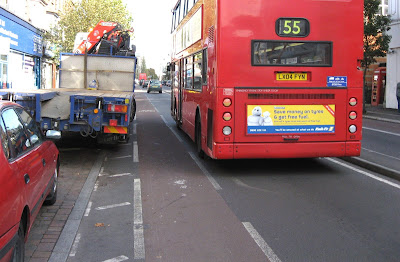 Posted by freewheeler at 14:44