Lorries killing cyclists: what is to be done? 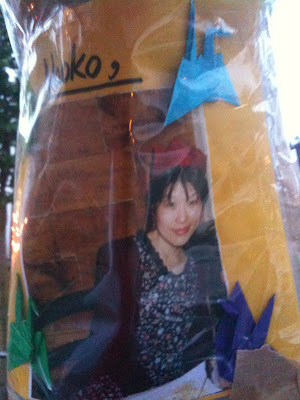 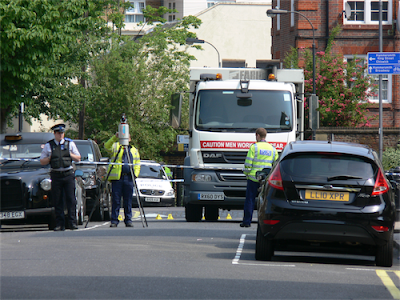 This is the scene of the latest killing of a London cyclist, in Hammersmith last Thursday. It’s a very revealing picture. The victim, whose name was Naoko, was apparently following her usual commuter route to an office in Hammersmith. She was crushed to death by a waste lorry. The location is on a marked cycling route, on a two-way traffic-calmed street. The crash site is by a speed table.

This latest killing of a London cyclist by a lorry driver was ignored by BBC London News, which has a policy of ignoring cycling deaths unless they involve a socially prominent person or a child. This reflects the car-centric values of the BBC. The London Cycling Campaign continues to insist that the BBC is ‘cycling friendly’, which is manifestly absurd. The LCC website has likewise failed to register this death, but then every death like this is an indictment of the miserably failed policies of the LCC and its traditional campaign posturing that cycling is safe and best done amid motor vehicles.

The circumstances of Naoko’s death are at present obscure and the next few days might provide some clarity (e.g. whether or not the lorry driver was arrested on suspicion of a driving offence). But irrespective of whether or not the cyclist or the lorry driver is held to be at fault, what strikes me about the scene is the environment it represents for both. The road is three lanes wide, yet parking is permitted on both sides and lorries and cyclists are funnelled into the gap in the middle. It’s inherently a conflict situation. And this is where ‘the right to ride’ leaves you – dumping cyclists between lines of parked cars. This is the kind of rubbish that orthodox cycle campaigning is seduced by – ‘quiet routes’ with traffic calming. They are just as much a deterrent to mass cycling as main roads with cycle lanes.

And look closely. One of those parked vehicles is the ubiquitous black cab. London is clogged with thousands of black cabs, which enjoy ridiculous privileges and have entire traffic lanes dedicated to their free parking. There are vastly more cyclists in London than black cab drivers, yet the black cab lobby has real force, whereas the LCC is dismally ineffectual. And behind the parked black cab in the photo is a massive 4X4.

Cycle of Futility argues that

The problem is not “collisions between cyclists and lorries”, it is that lorries drive around our streets mowing people down.

Yes. But the real problem is that cyclists are expected to share space with lorries. In other words, it’s the infrastructure. On Queen Caroline Street you could very easily separate cyclists from motor vehicles, but it’s not something the fundamentalists at the LCC have ever believed in. And even at the level of vehicular cycling, this is a failed cycle route. ‘Alien’, who took the above photographs, comments

Police at the scene, when I said lorries/cars treat this area as a rat run agreed. They'd received complaints from residents in the area.

Road closures to prevent rat running remain the exception rather than the norm. And cycle access through such road closures is often risible.

On the same morning, a short time earlier, a commuter cyclist died in Edinburgh. Again, it occurred on a street where lorries and cyclists are brought into conflict:

Last night local residents and a cycling campaign group voiced concerns that recent work to extend the pavement outside the school and a nearby roadworks diversion could have contributed to the tragedy.

Victoria Lamb said changes to the width of the road had made it more precarious for cyclists.

"The pavement outside the school was extended about two months ago and it's narrowed the space for anyone, particularly a cyclist, turning into East Claremont Street," she added.

Douglas Henderson, 65, who lives in Broughton Road, said: "The new pavement outside the school juts out too far, meaning the road is now too narrow.

there are a number of factors here that make for grim reading. Broughton Road is closed for 12 weeks for gas works so all traffic is being diverted up E. Claremont St, a relatively narrow cobbled road with cars parked on both sides all the way down; directly opposite the accident scene is the main North Edinburgh refuse depot, with dozens of rubbish trucks coming in and out every hour; the traffic crossing has been widened in the last month (there's a primary school there, and the lollipop ladies often have to dodge RLJers - cars and, less so, bikes, there), narrowing the road by some 6ft or so. BBC is saying it's a bloke in his 20s, a lorry's involved, so pure conjecture would lead me to believe truck was turning left into E. Claremont St and took him with it. Just grim news, I cycle this road every day and have had numerous incidents here

Once again, on-street car parking combined with the new fashion for footway build-outs (another form of pinch point), puts cyclists in among lorries in a confined space, contributing to a situation that puts cyclists in danger, and deters the majority from cycling.

It’s a lesson the LCC and its branches show no signs at all of wanting to learn. After the previous London lorry killing in Camden ‘Lucky’ asked FFS. When will Boris do something about lorries in London.

Up popped that regular commentator ‘charlie LCC’ (who I assume is the LCC’s Campaigns officer, Charlie Lloyd)

Despite some comments, Boris's people are doing some things to help reduce the number of these horrors. We think they are close to including on-bike cycle training in the lorry driver CPC courses run by TfL, if they can get the approval from the authorities. We need to keep pushing for councils and companies to take up this training.

In other words, maintain the status quo. Don’t get rid of lorries or re-design the streets to keep cyclists separate from lorries. Instead ‘train’ lorry drivers to be aware of cyclists, and encourage cyclists to sit in lorry cabs to understand how limited the driver’s vision is.

This provoked an angry retort from ‘spindrift’, which you can read here.

I don't think we should derail this thread into politics, tempting though this is. As editor of the Camden Cyclist, I am saddened and horrified by what I've read about this crash, which has occurred on 'our patch'.

But protestations of anguish don’t get us anywhere. Charlie Lloyd’s defence of Boris Johnson was just as much a political intervention as ‘spindrift’s’ entirely reasonable retort.

With all this stuff about the panacea of lorry driver training, it’s worth bearing mind that

Motorcycles (53 per cent), light vans (52 per cent) and four-axle rigid HGVs (52 per cent) were the vehicle types that most frequently exceeded the speed limit on 30 mph roads.

Charlie Lloyd popped up again on the Guardian website. He was anxious to sideline the call for separate cycling infrastructure:

The integration vs. segregation debate is largely internal to the cycling community. A far bigger hurdle to jump is the embedded belief amongst most traffic planners and politicians is that maintaining motor traffic capacity is the first priority.

That might be true if cycle campaign organisations had asked for separate cycling facilities to be met with the argument that it would cause congestion, but it’s not true because the LCC has never asked for it. The clique who run the LCC don’t believe in segregation and never have done. They don’t have a holistic approach to cycling, which is why when the London Assembly consulted on parking enforcement neither the CTC nor the LCC could be bothered to respond. On-street car parking is of no interest to the CTC or the LCC and they have never lifted a finger to oppose it. They are collaborationist organisations, complicit in maintaining the status quo. This makes perfect sense if you believe that the place of cyclists is among HGVs and buses and white vans, which is the position of the guru of orthodox British cycle campaigning, John Franklin.

The Cycling Revolution is a social revolution, it is a behavioural revolution as well as an infrastructure revolution. It is already happening in parts of London and other cities.

This is the usual tosh. There is no cycling revolution in London..

As fast as some people are recruited to cycling, an equal number give up. Like Karl McCracken’s dad.

It’s a complete delusion that cycling can be turned into a mass activity through a ‘behavioural revolution’ without supplying safe, convenient, segregated infrastructure. And after thirty years of the London Cycling Campaign we still don’t have a single street in Greater London where the cyclist comes first. Meanwhile the killing of cyclists by lorries continues with the same sickening regularity. And Trixi mirrors and cycle training and lorry driver training are all irrelevant and a diversion from the fundamental issue of redesigning London’s streets for safe cycling.

And this kind of project is absolutely typical of the LCC:

The LCC’s Lucy Cooper explains the project’s genesis: “Gwen recognised that cycling is a great solution to get older people active as well as being a convenient way to get about. She was aware, however, that many people she met of a similar generation lacked confidence and overestimated the barriers to cycling. As a result, Gwen set up The Agewell on Wheels pilot project in Hammersmith and Fulham to respond to these barriers.

This is the usual patronising stuff which locates the barrier to cycling in the individual's fears, not infrastructure. People don't want to cycle in traffic: that's the barrier to cycling, and this project doesn't address it. Instead it requires participants to adapt to traffic. It will work with a few people but it will never get masses of elderly people cycling in the way that occurs in the Netherlands.

The courses provide intensive support to combat barriers to cycling. Advice is given on buying bikes and how to use the cycle hire scheme (more on that later), free DR bikes if they already have a bike, route planning information, an introduction to their local cycling community through led rides and free LCC membership.

Naturally there is nothing about numbers or retention. And gosh, this is SO typical of conditions for cycling in London, is it not? 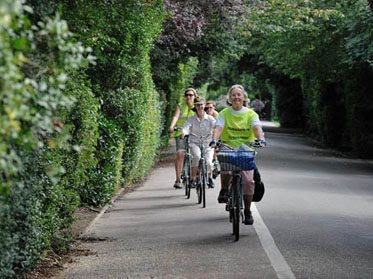 Posted by freewheeler at 19:42