Cann Hall Road: the fraud of the ‘Green Olympics’ legacy

As part of the Council’s ongoing regeneration effort to ensure that Waltham Forest “gets more from the Games”, funding has been secured for improvements in Cann Hall Road and Crownfield Road.

The scheme will significantly contribute to development of improving the pedestrian and cycle links to the Olympic Park, which will assist in the objective to host the first ‘public transport’ Olympic and Paralympic Games.

The works will be funded entirely by the Department of Communities and Local Government (DCLG). This funding has been specifically designated for improvements in this location of the Northern Olympic Fringe.

And this is what Northern Olympic Fringe funding has done to Cann Hall Road, all the way along it, on both sides, even by a school and a local park. This is car-dependency gone completely mad, profoundly hostile to walking and cycling, and dehumanising a neighbourhood to an extraordinary degree. If you want evidence that the supposed environmental benefits of London’s Olympic Games are bogus, look no further than Cann Hall Road E11. 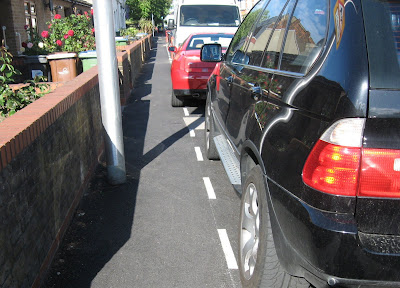 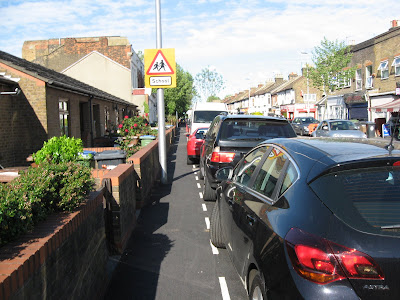 Cann Hall Road E11 is a road which offers a direct route to the Olympic site from Wanstead Flats, the location of a supposed Olympic ‘Greenway’ for cyclists and pedestrians. Waltham Forest Council has obtained funding and spent £1,513,790 on so-called ‘improvements’ to Cann Hall Road and its continuation, Crownfield Road. The ‘improvements’ are the same on both roads.

In a nutshell, what Waltham Forest Council has done is

(i) widen the footways and convert them into free parking bays, which on Cann Hall Road results in widths of a metre and sometimes less, well below the national guidelines for meeting the needs of pedestrians and those with a mobility handicap. Pedestrians are now left with a narrow corridor along which it is impossible to walk side by sided with another person.
(ii) these roads have been narrowed, making them even more dangerous and unattractive for cycling on than they were before. To avoid ‘dooring’ you need to take primary position; very few cyclists will have the courage to do this on these roads.
(iii) the removal of existing chicanes has resulted in a noticeable rise in vehicle speeds, with some drivers plainly going in excess of 30 mph.

Both these roads are in areas of high deprivation, with the probability that around half or more of the households on these streets don’t own a motor vehicle.

This is how Waltham Forest Council originally dressed up this poisonously car-centric restructuring of these streets. The scheme promised

the provision of an attractive walking and cycling route to the Olympic Park. 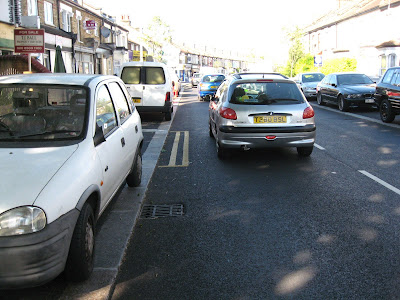 Disabled people especially those with mobility problems or restricted vision and their carers also have particular requirements when navigating the public realm and these have been fully considered at the design stage.

Technical advice and guidance was taken from the Council’s Access Officer at all stages of the design to ensure that the known needs of disabled people with a range of disabilities or impairments was taken into account and to ensure that no specific groups would be adversely affected by the proposals.
I have no idea who the Council’s Access Officer is but I am baffled how they can support proposals like these, which are deeply hostile to the needs and interests of blind pedestrians, wheelchair users and others with special mobility needs.

“The provision of wider footways will also aid to reduce the fear of crime by removing possible conflicts between people in narrow areas.” 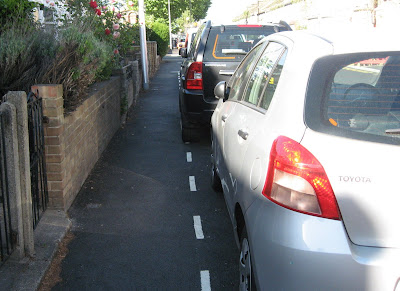 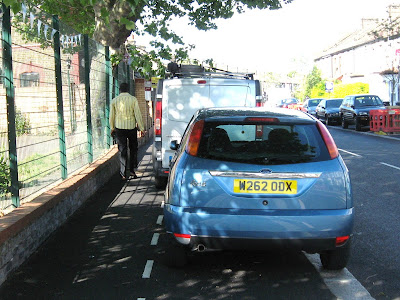 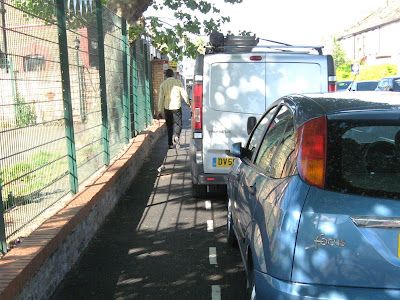 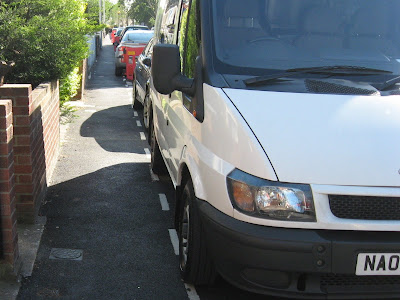 Of all the weasel justifications for handing over footways for unlimited free car parking, this takes some beating:

“The provision of parking areas at footway level will improve vehicular access for disabled people.” 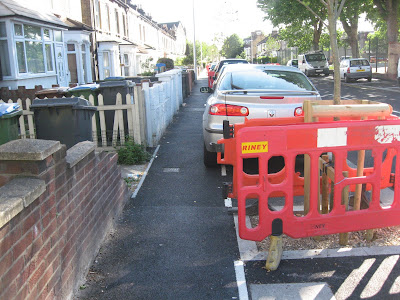 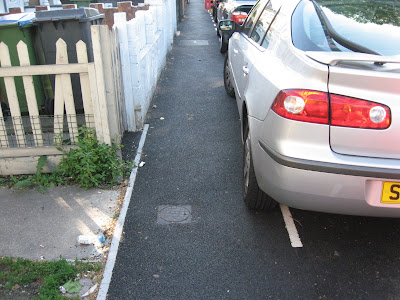 (Below) Even those households with off-street parking get a parking bay, in order to encourage multiple vehicle ownership. 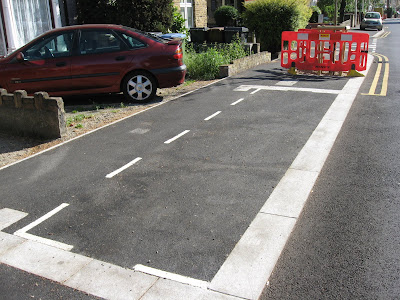 Finally, take a look at the photos on p. 14 here and compare them with my photos, taken on 8th May. 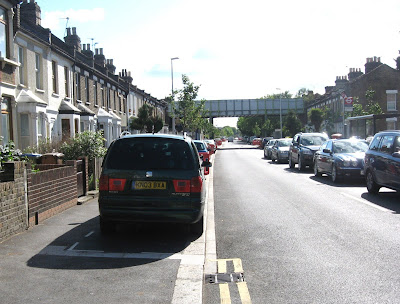 The real reason for this insane scheme is hidden away in this sentence:

These measures will provide extended footways when the bays are not being used and protect cars when parked in the recessed bays.

Protecting cars – the Grey Fleet planners of the London Borough of Waltham Forest take that very, very seriously indeed.
Posted by Freewheeler at 08:49