Wood Street, Walthamstow. Two mighty steel legs appear from nowhere, obstructing the footway. Is it a scene from The War of the Worlds? 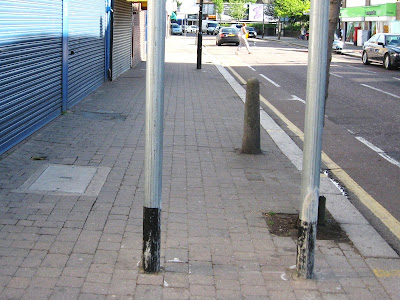 In a way, yes. This obstructive pavement clutter has been installed to inform passers-by that two of the deadliest species in the universe have joined together for 'improvement works'. 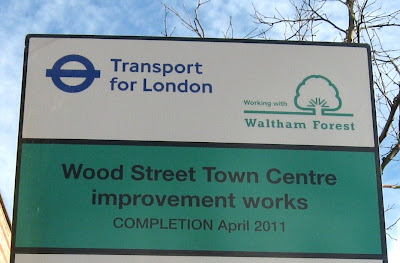 It says on the notice that the works will be completed by April. Which according to my calendar was last month. Perhaps TfL are using Northern Line Time (you know, ‘next train in 8 minutes’ and half an hour later you are still waiting for it to arrive).

(Below) The ongoing TfL/LBWF improvement works give blind pedestrians the chance to brush up on the necessary skills required to walk the streets of the London Borough of Waltham Forest. 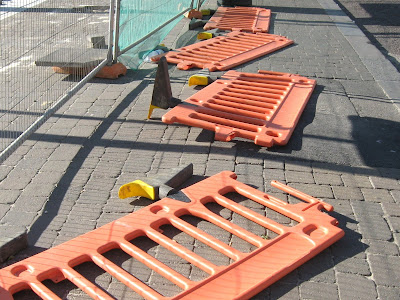 Whether or not these new ‘improvements’ involve anything more than the renovation of the grisly Wood Street pedestrian precinct beside some lacklustre local shops is not yet clear. Hopefully not. Wood Street between the station and Lea Bridge Road has already been ‘improved’ by converting the old cycle lane into parking bays and pushing cyclists closer to traffic on the new smooth, high speed road. The result (below) is the kind of cycling ambiance which is unattractive to everyone apart from cycle campaigners. And as Will Self once remarked, there is no sadder term in the English language than ‘cycle campaigner’.

They’ve got the message in Sitges. But not in London. Because as you can see, Wood Street is far too narrow for a segregated cycle path. So there's no point at all in asking for the impossible. 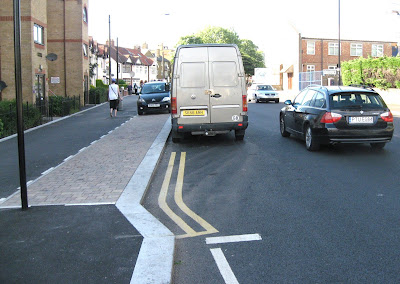 Posted by freewheeler at 17:38